The research and education cooperation between Germany and Poland is firmly established. This provides an excellent basis for further cooperations in the European research area. We must now use the experiences gained and look towards the future together. 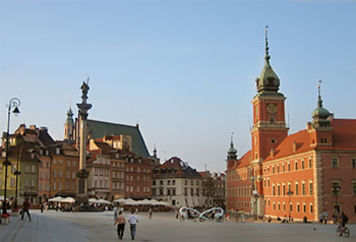 In view of the eastern enlargement of the EU, the BMBF launched the funding programme International Cooperation in Education and Research; Central, Eastern, and South Eastern European Region" ("regional call for proposals") in 2004 with the aim of promoting research projects between German scientists and partners from Central and Eastern Europe. The goal of these projects is a joint project proposal within the framework of funding programmes of the BMBF or in the framework of Horizon Europe. Various consortia from Germany and partners from Poland participate in this announcement with project proposals. Measures to come up with concepts to set up joint research bases are also supported. The aim is to forge closer links between the staff, organisations, and funding structures of Polish and German research institutions and research activities in companies by establishing these joint research bases.

Estonian, Latvian and Lithuanian institutions participated together with partners from Poland and the Nordic countries in numerous projects under the funding programme “Ideas competition to establish and expand innovative R&D networks with partners in the Baltic Sea Region - Circum Mare Balticum” –“ (”Baltic Sea - call for proposals”), for which the BMBF has invited tenders since 2010 and which is designed to initiate interdisciplinary, innovative R&D networks in the Baltic Sea region with the participation of all Baltic States. The projects funded by the programme concentrate on energy research, environmental research and technologies, ICT, marine research, innovation as well as health research and biotechnology. The objective of the funding programme is to exploit innovation potential through international cooperation and to boost the international competitive advantages of German companies and research institutions in the Baltic region together with their partners.

As part of the BMBF’s initiative to promote Germany as a key location for research, funding is provided for projects and measures that showcase the appeal of Germany and its research landscape to important partner countries like Poland. Such as attendance at the environmental fair POLEKO.

Poland is Germany's most important partner among the Central and Eastern European countries due to its economic and political ties to Germany.

The German-Polish research cooperation is based on the Agreement for Scientific and Technological Cooperation (STC) of 10 November 1989 and has developed dynamically over the last few years. This bilateral cooperation offers an excellent starting point for cooperation within the European framework. Following Poland's accession to the European Union, relations with Poland have taken on a whole new quality in the area of education and research.

Current cooperation partner at government level is the Ministry of Science and Higher Education (MNiSW). The STC Commission is comprised of both German and Polish members and generally meets every two years, alternating between Poland and Germany. It decides on the content and key areas of cooperation as well as on joint activities.

The Polish National Framework Programme identifies the following areas as strategic research areas for 2005 to 2015:

Focus of the German-Polish cooperation

In the clinical neurosciences, national programmes in Germany and Poland were linked with the second joint call for proposals: As a result, 23 German-Polish projects were able to receive funding during the period 2002-2010. The conditions for expanding cooperation within the European framework were thus created. During the period between 2007 and 2010, Germany and Poland worked together with nine other partner countries in the ERA-Net NEURON (Network of European Funding for Neuroscience). Germany was involved in eleven projects and Poland in one.

The issue of sustainability is moving to the forefront of bilateral activities through the national framework programmes "Action-Oriented Sustainability Concepts" and "Vulnerability of the Earth System". At two German-Polish workshops on "Sustainable Development" (in Katowice and Cottbus in October 2003 and 2005), the main subjects discussed were "Education for Sustainability", "Sustainable Production Technologies" and "Sustainability in Agriculture" and "Sustainable Tourism".
On 9 December 2008, the German Federal Ministry of Education and Research (BMBF) and the Polish Ministry of Science and Higher Education (MNiSW) signed a cooperation agreement in the area of sustainability research. The goal is to intensify cooperation in the fields of sustainable development, innovation, climate change, renewable energy sources and environmentally friendly technologies. It was against this background that the third Polish-German conference was held on "Sustainable development - from scientific research to political implementation" in Poland in November 2009. The BMBF and the Polish MNiSW made around six million Euros available until the end of 2013 for joint projects in "climate and energy", "sustainable business and resources" and "sustainable land management". Successful proposals submitted by German-Polish project teams were funded together by the two ministries. The announcement was designed to foster research in natural science, technology, organisational, social and societal aspects relating to sustainability. The projects were to concentrate on sustainability issues that are of great interest to Germany and Poland as a result of their ecological, economic or scientific significance. The aim of these projects is also to strengthen research collaboration in the European Research Area.

Since 2005, the BMBF has been participating in the biggest environmental fair in Eastern Europe, the international environmental fair POLEKO, with a trade fair booth and in accompanying events. This is held in Poland every autumn. At the BMBF’s booth, numerous German research institutions exhibited their application-oriented projects and products and were able to recruit future cooperation partners from the Polish business and science communities.

On 22 April 2008 the first German-Polish research forum was held in Leipzig. Federal Minister of Education and Research Annette Schavan and her Polish counterpart Barbara Kudrycka opened the forum which was attended by some 250 high-ranking representatives from politics, higher education, science and research. The main objective of the forum was to set the course for closer cooperation between the two countries.

These efforts centred on supporting young scientists and strengthening partnerships and networks. Key areas in terms of content were environmental research and sustainable development as well as the humanities and social sciences.

The forum was the first of its kind between the two countries. It presented the achievements of German-Polish research cooperation to date and highlighted possibilities for future cooperation. Working groups submitted proposals and recommendations on six topic areas. In a podium discussion, representatives of leading science and intermediary organisations in both countries expressed their opinions on the potential opportunities offered by cooperation.

In line with the importance attributed to research and technology in the two countries, cooperation in this area has developed dynamically over the last few years. Direct proximity, close bilateral relations, EU membership and a wide range of cooperation structures all shape the cooperation between these two countries. Research areas to be emphasised include life sciences, health, sustainability research and environmental research, materials research, physical and chemical technologies, fusion research, humanities and social sciences. Cooperation also takes place particularly under the EU Research Framework Programme.

The internationalisation and advancing European integration represent opportunities for Germany's science and research landscape and for the private sector.