The Czech Republic continues to increase its strategic R&D investments. This is the way in which the country strives to catch up with Europe's innovation leaders from 2030 onwards, and Germany will be its key strategic partner on this path. The European Research Area (ERA) will benefit from the strengths of both countries in science and economy. 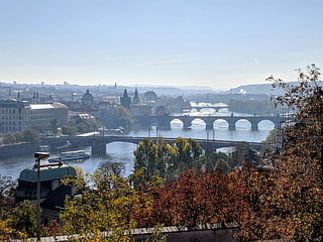 The Federal Ministry of Education and Research (BMBF) supports the cooperation of German institutions with Czech partners through a variety of funding announcements.

The Czech government is already looking beyond the seven year periods of EU funding. In 2019, the country launched its long term innovation strategy for 2019-2030, with the main goal to become one of Europe's innovation leaders from 2030 onwards. Within a decade, the Czech Republic is aiming to move into the group of leading countries with a ranking of above 125% of the EU average in innovation performance, compared to the current ranking as a moderate innovator with around 90% of the EU average. The R&D strategy 2021+, which was adopted at the end of 2020, is also committed to this long-term goal. Thus, improved financing and improved management of R&D are the central goals presented in this document.

As a neighboring country to Germany, the Czech Republic has a similarly strong industrial character, particularly in the mechanical engineering and automotive industries. Comparable to Germany, the country is therefore striving to secure and expand these traditional economic strengths through a strategic innovation policy. The Czech AI strategy of 2020 is one of the important elements of this strategic orientation. The importance of Germany as a strategic partner country is underpinned by the strategic dialogue between the two countries established in 2015 across the entire breadth of bilateral relations, in which joint R&D activities play a prominent role.

Range of science and research

The Czech Republic has – primarily in the capital, but also beyond – a number of renowned universities, above all Charles University in Prague, which, like Heidelberg University, was founded in the 14th century. Prague is home to almost half of all Czech universities, the second most important university city is Brno with six institutions. In addition, renowned universities can also be found in e.g. Pilsen, Mlada Boleslav or Ostrava.

The central science and research facility is the Academy of Sciences (AV CR), which can trace back its history for 130 years. The academy, with its currently 52 institutes and around 8,000 employees, contributes about a third of all Czech scientific publications. With its strategy 'AV21 - Top Research in the Public Interest', it has adopted an applied science approach that is geared towards economic exploitation and social benefit.

The Czech Republic financed and established a modern research infrastructure with EU funds in the funding period 2007-2014. Eight R&D centres of excellence were established and around 40 existing regional R&D centres were expanded. The centres of excellence, mostly located next to and sponsored by university and / or academy institutes, are dedicated to the fields of laser physics, mainframe systems, nanotechnologies and health.

One of the most important facilities is 'ELI Beamlines', representing the Czech part of the "Extreme-Light-Infrastructure", the first and so far only European research infrastructure that is exclusively being built and operated in the new Eastern European accession countries. The facility near Prague houses the world's most powerful laser and enables innovative research, particularly in the fields of materials science, astrophysics and biomedicine. Outside of Prague, the CEITEC (Central European Institute of Technology) is the nanotechnology and environmental centre in Brno, while 'IT4Innovations' is the central mainframe computer system for the Czech research landscape in Ostrava.

In 2015, the BMBF and the Czech Ministry of Education and Research (MŠMT) initiated a German-Czech conference series to network German research institutions with the Czech centres of excellence and integrate them into the context of the German-Czech strategic dialogue. The kick-off event in February 2015 in Prague addressed material physics, information / communication technologies (ICT) and environmental research. In January 2017, the second conference on energy storage and supply took place in Erlangen, again with the participation of around 100 experts from science, research and business from both countries. In May 2019 the series was continued in Brno and dealt with the research fields of nanotechnologies, new materials and mobility 4.0.

As a follow-up offer for the conferences by BMBF and MŠMT, a second bilatera EUREKA call was published in February 2019. The call, focusing on nano technologies, new materials and digitization, evoked a high participation with 17 proposals. Five projects were selected for funding and started between the end of 2020 and the beginning of 2021.

Czech universities and academy institutes are intensly involved in projects of the EU Framework Programme for Research and Innovation 'Horizon 2020'. German institutions are represented with around 70% in projects with Czech participation, at the same high level as in the 7th Research Framework Programme. Germany is a leading partner country for the Czech Republic, well ahead of France and Italy. Transport research ranks highest as topical focus of joint Horizon 2020 participation, ahead of energy technologies and ICT.

A groundbreaking joint project is 'RICAIP' (Research and Innovation Center on Advanced Industrial Production), a bilateral Horizon 2020 project which will run from 2019 to 2026. Two research institutions from the Czech Republic and two from Germany are involved. The project aims to establish a research infrastructure with partners from all over Europe. Its field of research cover artificial intelligence, robotics, machine learning, and computer sciences.