Following its EU membership in 2007, Bulgaria has been improving its innovation competencies and technological capabilities, which is mirrored in its parameters of international benchmarks. Impacts of Bulgarian top research can be observed on an EU level. Germany is Bulgaria’s central cooperation partner country. 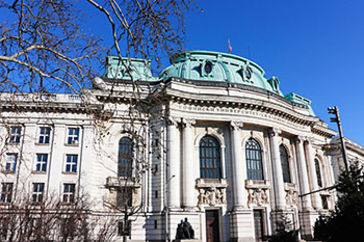 The Federal Ministry of Education and Research (BMBF) supports the cooperation of German institutions with Bulgarian partners through a variety of funding announcements.

Bulgaria’s performance in research and innovation has substantially increased over the past ten years. Thus, the European Innovation Scoreboard reveals an increase in innovation performance of approx. 8 % since 2012, although Bulgaria still belongs to the last group of 'modest innovators', with its innovation score of less than 50% of the EU average. The last decade shows an overall increase of the R&D rate compared to GNP, the value rose from 0.57 in 2010 to 0.84 in 2019. Bulgaria gained one more rank in the recent Global Competitiveness Report as of 2017/2018, now residing at rank 49.

These achievements have been enabled and enforced by measures and endeavors on the basis of the National R&D Strategy 2014-2020. Titled 'Better Science for a better Bulgaria', a broad range of activities have been implemented to foster institutions and staff all over Bulgaria for a sustainable modernisation of the research environment. The strategy’s central goal is to attract excellent young scientists to the country and retain them, as well as to ensure a sustainable economic growth. Prioritised fields of research and innovation have been identified in energy technologies, mechatronic, environmental technologies, life quality/health research, material science and ICT.

Priorities of science and research

Bulgaria’s most renowned universities are located mostly in the capital Sofia, furthermore in Plovdiv in the south and Varna, next to the Black Sea, in the East. In Sofia, the university 'St. Kliment Ohridski' and the Technical University are well known, and so is the university 'Paisii Hilendarski' in Plovdiv.

Traditionally, the Bulgarian Academy of Sciences (BAS) has been playing an important role. With its approx. 3000 employees – amounting to approx. 15% of Bulgaria’s scientists –, the BAS contributes to more than half of all scientific publications. The academy addresses not only basic science, it also defines its role as fosterer of innovation with impact to the economic development of Bulgaria. The focus of research of BAS’s, mostly Sofia-based, 42 institutes is dedicated to ICT, energy research, nano technologies/new materials and biomedicine.

A joint project for commercialising science and research output in Bulgaria has been implemented in the Sofia Tech Park. Five of Sofa’s leading universities – St. Kliment Ohridski, Technical University, Medicine High School and universities of National and Global Economy and of Finances, respectively – combine their technology transfer initiatives in this centre. The Tech Park’s most important part, besides its laboratories and its 'Experimentarium' with showrooms and a tech museum, is its incubator with 43 start-up companies to date.

Cooperation and potential at EU level

A large part of the Bulgarian universities and national research centres are strongly involved in European cooperation and participate in the EU research funding programme Horizon 2020. Furthermore, some of these institutions contribute uniquely to the European Research Area (ERA). Thus, with its competence in informatics, Bulgaria acquired one site of the European infrastructure of high performance computing centers EuroHPC. The Sofia Tech Park is hosting the Bulgarian site of one of the five Peta Class computers, with its 1015 calculation per second. The European research centre CPSBB (Center of Plant Systems Biology and Biotechnology) has been established in Plovdiv, in the neighbourhood of the Laboratory for Metabolomics of the Academy’s Institute 'Stephan Angeloff' (IMicB). Jointly with partner institutions from all over Europe, the centre will run research programmes in the field of plant systems biology.

German scientists and researchers are already making multiple use of these cooperation potentials. Hence, the rate of joint participation in Horizon 2020 increased substantially as compared to its predecessor, the 7th EU Framework Programme for Research and Development (FP7). The main focus of these joint project participations is dedicated to research on energy technologies.

Numerous German scientists and researchers are already participating in and contributing to the Bulgarian research facilities of EuroHPC and CPSBB, be it in its computing network, be it in its range of project partners. A decisive contribution to CPSBB’s establishment, besides, has been delivered by German institutions in the bilateral EU-Teaming project 'PlantaSYST'.