For Germany and Greece, bilateral research cooperation within Europe is a key element of national research policy. The joint Research and Innovation programmes and the approaches in vocational training provide a significant impetus for further strengthening the close cooperation. 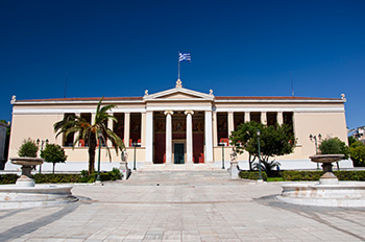 The German-Greek Research and Innovation Programme addresses collaborative projects of applied research, development and innovation in research areas which are important for both countries, such as health, bioeconomy, energy, humanities and social sciences, materials and key enabling technologies. The programme aims to enhance cooperation between Greek and German partners in science and industry and to strengthen knowledge and technology transfer.

Particular attention will be paid to the involvement of young researchers on both sides, also as an approach against 'brain drain' in Greece. Furthermore, joint research projects should strive for compatibility with the European Framework Programmes for Research and Innovation to enable interlinking this bilateral funding measure with measures at European level.

As a result of the 2017 call for proposals on bilateral research and innovation cooperation, 24 projects started in the first half of 2018. A midterm meeting – during which the progress of the jointly funded projects will be presented – is scheduled to  be held in the 2nd half of 2020. Furthermore, a final meeting will be held in Greece in 2021. Moreover a workshop aiming at knowledge and technology transfer took place in Athen in June 2019.

According to the Federal Government’s coalition agreement for the 18th legislative period, German science is to continue to play an active role in strengthening the European system of science and innovation. One focus is on joint research and development projects, particularly with EU member states strongly affected by the economic crisis.

The current formats of research and innovation cooperation respond to these requirements. The goal is to strengthen the internationalisation and Europe-orientation of German education and research institutions and to improve their competitiveness. The cooperation across Europe is to be expanded by concentrating on key priorities which are of mutual interest - particularly relating to the Federal Government’s high-tech strategy and the priority topics of the EU Framework Programme for Research and Innovation, Horizon2020.

The scientific and technological collaboration between the two countries was given a legal framework in 1978, which was subsequently supplemented by individual treaties. The most recent additions are the 'German-Greek Partnership Initiative' dated 5 March 2010, and the 'Joint Declarations of Intent on co-operation in the field of Vocational Education and Training' dated 10 December 2012 and 16 February 2016 (for 2017 to 2021). The latter are a direct response of the two countries to the difficult economic situation in Europe since 2009.

The priority topics of the German-Greek research and innovation programme are:

What is especially significant here is that the joint projects aim to produce findings and usable research results, which can lead to new technologies, products and/or services. In the long term, the objective is to improve the competitiveness and innovation potential of the partner in Greece.

The BMBF is successfully collaborating with Greece in joint research cooperations in research and vocational training as part of the German-Greek partnership initiative of the Federal Government (DGP) dated 5 March 2010.

The first Joint German-Greek research programme dated 21 March 2013 was aimed at bilateral research funding across research topics. The overwhelming number of more than 400 draft project submissions on both sides confirmed this approach. The high level of interest in the cooperation in science and research in both countries also continued.

23 research projects were selected in a joint selection meeting.

On the occasion of the Greek-German Days on research, innovation and young scientists in Athen 2015, both countries made an assessment of the first German-Greek research programme and prepared the second round. Moreover, former Greek vice minister for research Costas Fotakis and Parliamentary State Secretary Thomas Rachel awarded a prize to young scientists in the fields of energy and health for excellent project presentations. Six young scientists had the opportunity to visit outstanding research institutes in Germany and Greece in summer 2016.

The German-Greek cooperation is based on the memorandum on vocational training collaboration, which was concluded with six European countries in Germany in December 2012. In the last years Germany has been supporting Greece in the field of vocational training to reform local training systems and to introduce more dual elements.

The BMBF pilot project 'Mentoring Dual International', short 'MENDI' aimed at introducing dual-focus education in tourism in Athens and Heraklion. In addition, the project VETnet was launched in October 2013. The aim is to develop and try out dual vocational training elements and to prepare for pilot dual training courses together with companies. Both projects expired in 2018. Since June 2017 BMBF supports the project GRÆDUCATOION dedicated to environmental-technical professions. The project will be finished in May 2020.