Finland is one of the world leaders in innovation, research and development, technology and competitiveness. For years, Germany and Finland have been cooperating intensively at European level, not least within the framework of the Baltic Sea Cooperation. 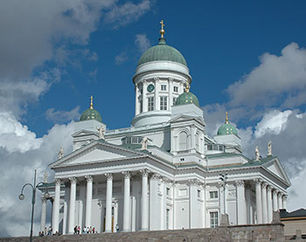 In 2010, 2011 and 2013 the Federal Ministry of Education and Research (BMBF) published an announcement to fund an ideas competition to set up and expand innovative R&D networks with partners in the Baltic Sea countries. The aim of this funding measure was to tap into innovation potentials through international cooperation and to boost the international competitive edge of German companies and research institutions in the Baltic Sea region. It is also aimed at encouraging cooperation with Finnish partners. Finnish institutions were involved in nine of the 15 funded projects.

In terms of innovation, research and development, technology and competitiveness, Finland has been one of the world's leading countries for many years. This is also confirmed by the 'Global Competitiveness Report 2017-2018'. Although there has been a negative trend since 2013, Finland still ranks in the top ten as the fifth European country behind Switzerland (1), the Netherlands (4), Germany (5) and Sweden (7).

In European comparison, Finland was able to defend its position as an innovation leader according to the 'European Innovation Scoreboard 2021'. The country remains in second place behind Sweden and ahead of Denmark.

The current government programme has set a number of objectives for employment, competi-tion, knowledge and education in order to establish a socially, economically and environmentally sustainable Finland by 2030.

This objective also coincides with the contents of the Finnish EU Presidency in the second half of 2019: The program entitled 'A Sustainable Europe - A Sustainable Future' sets four priorities:

With the establishment of the Strategic Research Council (SRC) in 2014, a reference frame-work for strategic research in Finland was established for the first time. The topics and fund-ing lines are coordinated with the government across departments and are intended to assist Finland in renewing the economy, industry and the public sector.

On 21 March 2017, the Finnish Ministry of Education published 'Better together for a better world 2017-2025: A strategy for internationalisation of Finnish higher education and re-search'. The strategy aims to create an attractive framework for the international research community and the higher education stakeholders in Finland by 2025.

On 1 January 2018, the Finnish funding agencies 'Tekes' and 'Finpro' were merged into 'Business Finland' (BF) with the aim of gathering all public services for innovation and SME promotion under one roof.

Within the BMBF's research programmes, the focus of research projects with Finnish participation is in the area of ​​information and communication technologies.

In the context of the EU Framework Programmes for Research and Innovation, German and Finnish researchers are increasingly working together in the fields of 'ICT' and 'Marie Sklodowska-Curie'.

BONUS (2010-2020) was a Joint Action under Article 185 TFEU of the eight Baltic Sea States, involving Russia as an associate partner with a holistic approach to marine issues in the Baltic Sea area. BONUS's last term covered 2010 to 2017, for the possible follow up funding period 2017 - 2021 BONUS has already developed an updated research programme involving the North Sea region. Nine research organisations are involved in BONUS EEIG (European Economic Interest Group), which was established in 2007. Germany's representative is Forschungszentrum Jülich, Finland is represented by the Academy of Finland.