How strong is the international dimension of the German science and innovation system compared to other countries? To answer this question, you need valid indicators. Within the framework of the 'International Bureau' (IB), DLR Projektträger supports the Federal Ministry of Education and Research (BMBF) in developing these in dialogue with research and intermediary organisations. 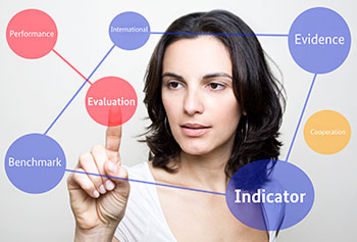 In order to assess the quality of the international dimension of a science and innovation system, valid indicators are needed. However, a generally recognised and internationally comparable set of indicators is not yet available. Against this background, the Federal Government announced the development of a national monitoring system for internationalisation in its 'Internationalization Strategy' published in 2017. The indicators are intended to allow a direct comparison with other countries and will be closely interlinked with European and international monitoring processes. At European level, one example is the so-called ERA Monitoring Mechanism (EMM), which monitors the implementation of the priorities for the European Research Area. Internationally, the OECD is an important point of reference.