Here you will find information about the websites of the EU Bureau, EUREKA Germany and EURAXESS Worldwide, which are maintained by DLR Projektträger, the project management agency of the German Aerospace Center (DLR). In addition, you will find links to further relevant international research cooperation institutions. 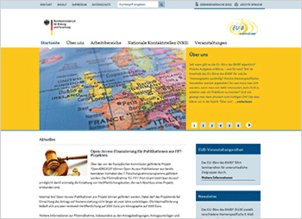 EU Bureau of the BMBF

The EU Bureau of the Federal Ministry of Education and Research (BMBF) is part of DLR Projektträger, the project management agency of the German Aerospace Center (DLR). It offers advice and support for questions regarding the current EU framework programme for research and innovation 'Horizon Europe' as well as EU research and innovation policies in general.

> more: EU Bureau of the BMBF.

EUREKA – the European initiative for market-relevant research and development

EUREKA supports and assists companies and scientific institutions with the implementation of European, market-oriented research partnerships focusing on innovative topics.and the network’s

This is a collection of organisations in the field of research cooperation and research funding.

The German Academic Exchange Service is one of the world's largest and most respected intermediary organisations in its field. Scores of students, teachers, researchers and scientists supported by the DAAD have been able to gain valuable experience abroad. However, there are also many other sides to the work of the DAAD.

The Alexander von Humboldt Foundation is a non-profit foundation established by the Federal Republic of Germany for the promotion of international research cooperation. It enables highly qualified scholars not resident in Germany to spend extended periods of research in Germany and promotes the ensuing academic contacts.

The AiF is the German Federation of Industrial Research Associations. The central concern of this registered non-profit association is the promotion of applied Research and Development (R&D) for the benefit of small and medium-sized enterprises (SME).

The Deutsche Forschungsgemeinschaft (German Research Foundation) is the central, self-governing research organisation that promotes research at universities and other publicly financed research institutions in Germany. The DFG serves all branches of science and the humanities by funding research projects and facilitating cooperation among researchers.