Following Romania's accession to the EU in 2007, Germany has become one of its most important partners. German experts and technologies are in high demand when it comes to initiatives and impacts in the frame of the European Research Area. The traditional strength of Romania's research lies in basic science and engineering. 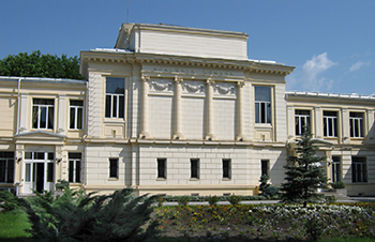 The Federal Ministry of Education and Research (BMBF) supports the cooperation of German institutions with Romanian partners through a variety of funding announcements.

With its multi-layered science and research landscape, Romania is closely integrated into the European Research Area. Germany is one of the most popular partner countries for Romanian activities and cooperations in the European context. According to the European Innovation Scoreboard, Romania belongs to the group of 'moderate' innovators, i.e. it achieves less than 50 % of the EU average of innovation performance parameters. The heavily industrialised country is constantly working on improving its innovation capabilities and technological competencies. Therefore, the Romanian government has decided upon a first set of priorities for the forthcoming EU funding period 2021 to 2027. In an inter-ministerial memorandum for advanced technologies, the area of ​​renewable energies was agreed as a priority innovation target. Future measures and activities in this area, especially for the development of hydrogen technologies, will be bundled via an expert network called 'RO-HYDROHUB'. Another pool of experts is being prepared in the field of artificial intelligence (AI).

A long-term effort in education policy is aimed at a comprehensively 'Educated Romania' in the year 2030. Initiated by the Romanian president Iohannis as a 'project of the century', the programme 'Romania Educata' started in 2016. By successive exchange in a series of regional citizens’ fora and expert conferences, a vision for the year 2030 was developed and twelve important fields of need were identified. Concrete objectives were set for the areas of preschool education, primary / secondary education and higher education, as well as for cross-sectoral issues.These ambitious goals are aimed, for example, at securing preschool offers for at least 30% of under 3 year olds and at least 95% of under 6 year olds, at placing Romania among the top 30 countries in PISA, and at reducing school and education drop-outs.

Range of science and research in Romania

Romania's wide and varied landscape from the Carpatian Mountains to the Danube river and the Black Sea, is mirrored by its diverse science infrastructure with a variety of research and innovation institutions. Renowned universities are found all across the country. The capital Bucharest hosts technical universities like Bucharest University and Polytechnical University, as well as universities for social sciences and humanities, and other institutions of international importance, like the New Europe College, the academy of economics ASE and the university of politics SNSPA. Romania’s highly renowned universities are located not only in Cluj-Napoca in the north,  and in Iasi in the East, but also in Timisoara in the west of the country. The Romanian Academy of Sciences also maintains centres and institutes in these main locations.

Romania’s specialised structure of technology institutions is represented by its approximately 40 national institutes for research and development (INCD). The most influential among these are institutes like 'Horia Hulubei' for physics and nuclear technologies, 'Elie Carafolie' for the aerospace sector, 'COMOTI' for propulsion technologies or 'GeoEcoMar' for geology and marine environmental sciences. A network of around 35 technology transfer centers and service points is also largely located at these INCDs.

Cooperation and potential on EU-level

Many of the mentioned universities and national research centres are strongly involved in European cooperation and outstandingly active in Horizon 2020. Some of these universities and research centres contribute significantly to the integration of the European Research Area. Romania was also selected as the site for the nuclear physics facility of the European research infrastructure ELI: the 'ELI-NP' was built in Magurele in the vicinity of the University of Bucharest and the INCD 'Horia Hulubei'. GeoEcoMar Bucharest, with its co-site in Galati near the Danube Delta, will host the international research centre 'DANUBIUS-RI'. The centre will conduct research programmes in the field of river systems with partners from all over Europe.

German scientists and researchers are already making good use of this cooperation potential. The rate of joint participation in Horizon 2020 increased substantially in comparison with its predecessor, the 7th EU Framework Programme for Research (FP7). The main focus of these joint project participations was on energy technologies. Romanian participation in BMBF’s specialised research programmes is the highest it has been in years, with a main focus on projects in the field of micro electronics. Numerous German institutions are already contributing to the Romanian research centres ELI-NP and DANUBIUS-RI, be it on their scientific boards or as project partners.