In recent years, Slovakia has increasingly focused on the promotion of research and development. The objective of a science-based economy is expressly pursued. The German-Slovakian cooperation is based on the agreement regarding the scientific and technological collaboration (STC) with what was then Czechoslovakia, in 1990. 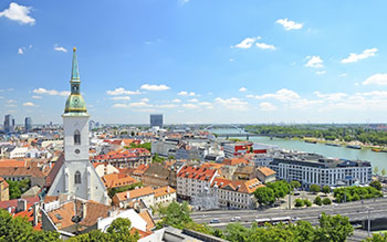 The Federal Ministry of Education and Research (BMBF) supports the cooperation of German institutions with Slovakian partners through a variety of funding announcements.

Slovakia, which has been independent since 1 January 1993, has been a member of the EU and NATO since spring 2004. With its entry to the Eurozone on 1 January 2009, Slovakia took another important step towards integration into the European Union.

Slovakia continues to demonstrate little R&D intensity in EU and OECD comparisons. The R&D share of GDP in 2012 was 0.82%. (OECD average: 2.40%), representing an increase of approx. 0.15 % over 2011. The public share amounted to about 60% of total R&D expenditures. At 40%, the R&D expenditures in the economy are low compared to other European countries. One reason for this is that the multinational companies active in the Slovakian Republic operate their R&D departments abroad and the small and medium-sized businesses (SMB) only carry out a small part of R&D.

Based on their national reform process of 2013, Slovakia aims to reach an R&D share of GDP of 1.2 % by 2020. In the 2015 Innovation Union Scoreboard (IUS) Slovakia, as well as its neighbours Hungary and the Czech Republic, rank in the category of moderate innovators with an innovation performance of 59% of the EU average. In the 2014-2015 Global Competitiveness Index, Slovakia ranks in 75th place of 144 listed countries.

In the implementation of measures in the areas of education, research and innovation, Slovakia places its bets on the positive effect of the EU Structural Funds.

The increased importance of R&D was documented in 2005 in the "Competitiveness Strategy for the Slovak Republic until 2010 - National Lisbon Strategy": This formulates the objective of a knowledge-based economy, as well as the high significance of R&D for the overall national development. The objectives of the national innovation policy are also summarised in the competitive strategy. The former government under Prime Minister Robert Fico reformulated the goals of the national science and technology policy in September 2007 ("Long-term Objective of the State S&T Policy up to 2015"). The document also sets the priorities of the national R&D policy.

The national reform program of April 2013 provides a focus of the public R&D sponsorship on selected subject areas. This includes, for example, materials research and information and communication technologies. A significant objective is also the establishment of an efficient system to support the Slovakian participation in Horizon 2020 and the reduction of administrative obstacles in the granting of structural funds. The main objectives in the improvement of the innovation capacities are formulated in the national Smart Specialisation Strategy.

Since 2005, the most important institutions in research funding have been the ("Research and Development Agency") (APVV) and, since 2006 the "Scientific Grant Agency" (VEGA), the scientific funding agency of the Ministry of Education and the Academy of Science. VEGA is primarily responsible for fundamental research.

In the context of regional cooperations, Slovakia is integrated in the CEEPUS II (Central European Exchange Programme for University Studies) program. There is also a regional network via the Visegrád (V4) group (Poland, Slovakia, Czech Republic and Hungary).

Slovakia is one of the target countries of the BMBF announcement regarding the “Setup and Expansion of Innovative R&D Networks in the Danube Region”, which was published in 2013. Institutions from Slovakia are involved in ten of 31 ongoing projects.

Within the scope of the programme "International Cooperation in Education and Research – Central, Eastern and South Eastern Europe Region" (regional call for proposals), funding for preparatory projects in applied research, development and education was provided to submit further project proposals for current funding programmes of the BMBF and in the 7th Research Framework Programme of the EU and the programme EUROSTARS. During this, eight measures with Slovakian partners that have since been concluded were supported.

In the context of the collaboration within the 7th EU Framework Research Programme, the cooperation in relation to the absolute project numbers focused on information and communications technologies.

The cooperation of the two countries in the context of the EU strategy for the Danube region (EUSDR) plays a special role. Slovakia and Serbia as coordinators are jointly responsible for priority axis 8, ”Development of a science community (research, education and information and communication technologies)”.