The long-standing cooperation with New Zealand in Science and Technology has been developing over the last few years. The current focus of the cooperation lies on climate and energy research. 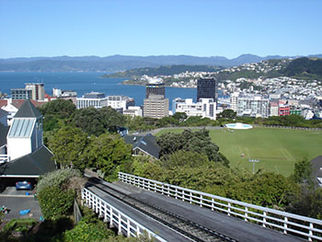 In principle, applications for project funding can only be submitted on the basis of funding announcements in which New Zealand is named as a target country.

An intergovernmental agreement on science and technology cooperation (STC) with New Zealand has been in place since 1977. In 2007, the former Federal Minister Annette Schavan signed an agreement with the Minister of New Zealand, Steve Maharey, in Berlin, with the aim to strengthen the cooperation in science and research through joint projects.

On the occasion of a delegation visit by the German Ministry of Education and Research (BMBF) in October 2018, climate and climate change research were agreed upon as a special focus area of the future bilateral cooperation. In recent years, the field of renewable energies was also agreed upon as a further focus area of the collaboration. In addition, scholarship programmes support the exchange of students and young scientists between the two countries very successfully.

Recording the rotational speed of the Earth

The joint project of the TU Munich, the University of Canterbury, Christchurch (New Zealand) and the Oklahoma State University, Stillwater (USA) on recording the variations in the rotational speed of the Earth using laser gyroscopes is a highly successful long-term cooperation with New Zealand.

Another example of the excellent cooperation with researchers from New Zealand is marine research, particularly joint research in the context of the research cruises of the German Research Vessel 'Sonne' which regularly visits New Zealand.

Based on a Memorandum of Understanding signed in October 2018 between the Ministry of Business, Innovation and Employment (MBIE) of New Zealand and the German Aerospace Center (DLR), joint collaboration has begun in 2020 with twelve feasibility studies in order to establish a framework for the long-term strategic research cooperation in agreed thematic areas. Due to the success of these studies, MBIE and DLR have agreed to jointly support a series of eight research projects in the areas of e.g. drive technology, space communications and radar (see also: 'Catalyst: Strategic New Zealand–German Aerospace Centre Joint Research Programme'.

DLR and New Zealand have also developed a new approach to bring together potential collaboration partners though competence workshops. The focus lies in creating synergies regarding interests, complementary capabilities and networking of already existing resources.

Upon the initiative of the Alexander von Humboldt Foundation (AvH), and as a follow-up to mutual high-level visits in 2004, New Zealand set up the Julius von Haast Fellowship Fund, a scholarship programme for German scientists which complements AvH scholarships. Also, in the context of European funding programmes the discussions are currently focusing on intensifying the cooperation in nanotechnology, IT, communication technology and biotechnology/health research. New Zealand’s R&D cooperation with Europe is supported by a science counsellor at New Zealand’s Embassy in Brussels and the Embassy in Berlin.

Special activities of the International Bureau

The IB’s cooperation with New Zealand has the aim of

From 2007 to 2017 the Royal Society, the BMBF and the Federal Ministry of Food and Agriculture (BMEL) jointly supported more than 140 projects.

In April 2019 BMBF, BMEL and the Royal Society of New Zealand published a joint call for proposals in the framework of the scientific and technological cooperation between New Zealand and Germany for the following areas:

For the first time, the funding also includes joint research. Since 1 April 2020, three projects have been funded by the BMBF / IB. Projects of the University of Leipzig and the Leibniz Institute for Tropospheric Research (TROPOS) are working with partners at the University of Auckland and the National Institute of Water and Atmospheric Research (NIWA) on the influence of aerosols on cloud formation and resolution, a process that has so far been illustrated insufficiently in the climate models. The third project, a cooperation between the University of Marburg and the University of Auckland examines the causes and consequences of climate-induced migration in the South Pacific region, an urgent socio-political challenge for the partner country New Zealand.

Within the framework of the 2020 call 'Establishment of Joint Research Presences on Green Hydrogen with partners in the Asia-Pacific Reasearch Area' (APRA), the Helmholtz Centre Hereon Geesthacht and the University of Otago have been setting up a joint research centre on green hydrogen since October 2021. The projects are co-funded by New Zealand in terms of personnel and equipment. The projects are planned for a duration of five years (three years set-up phase followed by a two-year consolidation phase).

Three joint projects will be funded starting in May 2022 through the bilateral call with New Zealand on green hydrogen (March 2021).