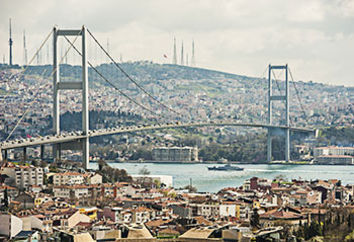 Robust economic growth and increasing investment in the science system make Turkey an interesting partner for both Germany and Europe. More than 5,500 German companies have already heavily invested in Turkey and established branch offices there. Many of these companies use the attractive investment funding measures and benefits of Turkey as a location. Germany continues to be Turkey’s most important trading partner. German-Turkish trade and economic ties are not a 'one-way street' in this process; around 75,000 Turkish entrepreneurs and businessmen and women of Turkish origin employ more than 375,000 people, generating an annual turnover of some 35 billion euros and thus contributing significantly to the German economy. Germany and Turkey have a special relationship due to the 3 million or so people of Turkish descent living in Germany, and on account of the integration policy of the European Union. Some 30% of the people naturalised in Germany between 2002 and 2012 are of Turkish origin.

The Turkish government has for some time now aimed to dynamically develop and expand the country’s universities and research institutes, and has set itself ambitious goals: Further universities are to be established by 2013 and the number of scientific personnel increased to 150,000 employees. National research spending will also be raised to 2% of GDP. The success of this initiative is reflected in the rise in international publications and patents.

With a view to further developing German-Turkish scientific cooperation, on 23 January 2014 the German-Turkish Year of Research, Education and Innovation 2014 was officially launched by the Federal Minister of Education and Research and her Turkish counterpart from the Ministry of Science, Industry and Technology with the signing of a joint declaration in Berlin. On this same day, the formal agreement of 1984 between the German Research Foundation (DFG) and the Scientific and Technological Research Council of Turkey (TÜBITAK) was renewed, and a cooperation agreement between the German Academic Exchange Service (DAAD) and the Turkish Council of Higher Education (YÖK) was signed. The legal framework for the scientific and technological cooperation (STC) between Germany and Turkey was based on an individual agreement between TÜBITAK and the project management agency for the German Federal Ministry of Education and Research (BMBF) dated 10 January 1997. German-Turkish education and research activities continue to be funded by the Alexander von Humboldt Foundation (AvH) and by foundations such as the Mercator Foundation and the Herz Foundation. Germany is the second most important partner country for research and educational activities after the U.S.A.

Cooperation work focuses on the jointly agreed key areas of the Year of Science 2014:

The following funding instruments have so far been developed jointly with TÜBITAK to initiate and intensify scientific cooperation with Turkey:

Under the motto „Science Bridging Nations“ Germany and Turkey are committed to bringing attention to the importance and successes of their collaboration and to building on their existing cooperation within research, education and innovation through forward-looking projects.

On 29 April 2014, the university was officially opened by Federal President Joachim Gauck and Turkish President Abdullah Gül in the presence of Federal Minister Johanna Wanka. Some 120 students had already started their degrees in three Bachelors programmes and three Masters programmes during the 2013/14 winter semester. The German founding president is Rita Süssmuth. This was preceded by the signing of the "Agreement to establish a German-Turkish university in Turkey" by both foreign ministers in 2008 in Berlin, and the laying of the foundation stone by the German and Turkish presidents in October 2010 in Istanbul. The faculties for law and natural sciences, economics, cultural studies/social sciences and engineering were all established at this time. The BMBF and DAAD both played a decisive role in the implementation of the project.

In October 2010, the German Federal Minister for Education and Research, together with her Turkish counterpart the Minister of Transport and Communications, signed an agreement on scientific and technological cooperation in the field of information and communication technologies. The research centre, with sites in Istanbul and Berlin, is actively supported by both the German and Turkish economies.

On behalf of the BMBF, the International Bureau (IB) maintains targeted funding programmes alongside the Internationalisation Strategy to help set up and/or further develop bilateral scientific cooperation between German and Turkish institutions. In essence, this involves funding cooperation between the two countries in the field of economic research and technical development by supporting scientific exchanges and joint research projects.