Egypt - known in the Arabic-speaking world as the “Mother of the World, Mutter der Welt – "مصر أم الدنيا" (Masr - Um al-Dunya) – is one of Germany’s most important strategic partners thanks to its geographical location. Particularly the German-Egyptian Year of Science 2007 set strong impulses for new priorities in the cooperation. 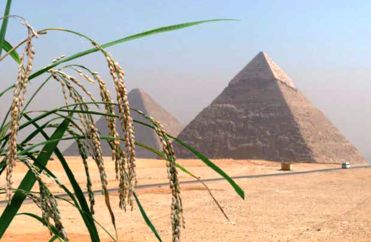 The International Bureau at the Project Management Agency of the German Aerospace Centre promotes measures and projects in the scientific and technological (S&T) cooperation with Egypt based on joint German-Egyptian research funds.

In the context of current announcements of the Federal Ministry of Education and Research (BMBF), applications can generally be submitted for grants for joint research projects relating to the bilateral education and research cooperation between Germany and Egypt.

The scientific and technological cooperation with Egypt is based on the intergovernmental agreements of 1979 and 1981 as well as on various individual or project agreements concluded between 1980 and 1985. As a conclusion to the joint Year of Science 2007, the two ministries also signed an agreement on implementing a joint research fund. Since 2012, Egypt has been cooperating with the German Federal Government in numerous projects within the framework of the transformation partnership, including the fields of vocational training, higher education and research.

The German-Egyptian Research Fund GERF provides an institutionalised platform to implement specific impulses from the joint '2007 German-Egyptian Year of Science and Technology'. The research funding tool has been continually advanced since 2008 and constitutes a sustainable basis for the priorities and results of the Year of Science.

The joint fund particularly enables teams of young scientists from both countries to carry out innovative and applied research projects relevant to industry. The research results that have been developed are to be applied to concrete applications in a timely manner. A further goal of the bilateral research fund is the support of scientific networks when applying for funding from the EU Framework Programme HORIZON2020 or from national funding programmes.

Since the joint funding tool was implemented in 2008, the German Federal Ministry of Education and Research (BMBF) and the Egyptian Science and Technology Development Fund (STDF) have published a total of five joint calls for tender (2008, 2010, 2012, 2015, 2018) in the fields prioritised in the Year of Science (Biotechnology, Medicine, Material Sciences, Water, Renewable Energies, Humanities and Social Sciences) and one interim announcement was made (2011) specifically aimed at the Humanities and Social Sciences. Between 2008 and today, a total of 92 joint research projects have received funding in the context of the German-Egyptian Research Fund. A further funding announcement will be published in 2021.

The German University Cairo (GUC) is the first private 'German' university abroad - formally a private institution under Egyptian law but with a German name. It is of great importance politically and represents the excellent cooperation between the two countries. In addition to engineering, and applied natural, economic and administrative sciences, its course offer also includes multimedia design, communication and media sciences, management and life sciences.

Since its opening in 2003, the GUC has enjoyed a high reputation as an 'extraordinary example' (DAAD) of transnational education among the approximately 10,000 students and academic partners, including the founding or partner universities of Stuttgart, Ulm and Tübingen as well as Mannheim.

The GUC works closely with the German business community. For example, the materials testing laboratory set up with German support offers good conditions for cooperation projects between science and industry. The industrial park located on the GUC site has succeeded in establishing fruitful and mutually complementary partnerships between science and renowned partners from German industry, including Trumpf, FESTO, DMG, Zeiss, etc. In order to strengthen and coordinate the bilateral exchange on the student and scientific level, a campus was opened in Berlin in 2012.

Following on from the successful GUC model, the German International University of Applied Sciences (GUI AS) was opened in 2019. Under the leadership of the Berlin University of Applied Sciences, a large number of German universities are involved in its establishment, including the UAS7, an association of 7 universities of applied sciences with a strong international orientation. Six faculties, e.g. for engineering, biotechnology or computer science, are already active in research and teaching, and six more are planned. Together, they cover a range of application-oriented research activities, in which processes technology companies from the most diverse professions are to be integrated as soon as possible.

The autonomously operating GIU AS takes up the German model of practice-oriented education of the 'University of Applied Sciences', including internships and practical theses. Its German counterpart, the German University of Applied Sciences, located in Berlin, enables students and academics from both countries to engage in a true-to-life exchange. Teaching in English and compulsory German courses prepare Egyptian students for a secure and consolidated future in the world of science and business.

Further priorities of the German-Egyptian cooperation

Drawing on this impetus, the project COSIMENA (Clusters of Scientific Innovation in the Middle East and North Africa) took over the work of the DWZ in 2017. Supported by a large number of organisations from both countries, it is dedicated to pooling existing and implementing potential German-Egyptian cooperation in the fields of water, energy, urban planning, health, economy, agriculture and cultural heritage. Formats such as topic-specific conferences, the 'German Science Day', the 'Night of Science' and various summer schools contribute to consolidating the relationship between the science systems of both countries.

A further building block of German-Egyptian scientific cooperation is the regional office of the Arab-German Young Academy (AGYA) in Cairo, which opened in 2018. As the world's first German-Arab network of excellence, AGYA primarily supports interdisciplinary research projects of young scientists on a supra-regional level. The AGYA regional office, established and financed by the Egyptian Academy for Scientific Research and Technology (ASRT), is committed to supporting young scientists from both countries. As an intercultural think tank at the interface of science and politics, it also builds bridges between Germany, Egypt and other countries in the MENA region.

Ministry of Electricity and Energy (MoEE)

Partnership for Research and Innovation in the Mediterranean Area (PRIMA)