Soil-conserving measures such as direct seeding without prior tillage have great potential in the fight against erosion by wind and water. A long-term study in Argentina aims to test the effects on soil organisms.

Farmland of long-term trial in the province of Buenos Aires © K. Smalla

Direct seeding is now widespread in Argentina, as it is seen as a promising weapon in the fight against soil erosion by wind or torrential rain. In Germany, no intensive research into direct seeding has been conducted as yet. However, soil erosion is also an important issue in German agriculture.

In May 2014, the Federal Ministry of Education and Research (BMBF) and its Argentinian counterpart MINCyT in Buenos Aires held a “German-Argentinian Bioeconomy Workshop” at which a long-term study (“Monumento Histórico”) being conducted on a farm in the province of Buenos Aires was presented. This experiment, which has been under way since 1987, is a unique opportunity offered by the ELMAB project to compare the effects of the soil-conserving direct seeding method with those of the traditional method of seeding after tillage in terms of yield, organic soil substance, permeability, water availability and soil life – particularly microorganisms.

Varying composition of organisms in soil 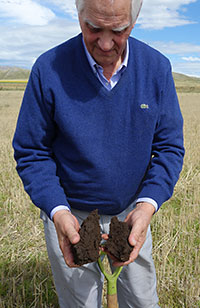 The project partners used molecular fingerprint methods to investigate soil samples taken in July and December 2014. Significant discrepancies were found between the composition of the bacteria in each soil layer, also depending on the treatment the soil had received. Both dominant bacteria and archaea (primeval bacteria) were identified. The volume of these microorganisms also varied significantly depending on the cultivation method used. Some of these organisms may for example play a role in the nitrogen cycle. Germany and Argentina are not the only countries in which farmers are interested in preserving soil resources in the long term, thus making an important contribution to sustainable agriculture. It is important to establish how the direct seeding method affects soil life, as soil microorganisms are largely responsible for properly functioning substance cycles and soil fertility. This can now be investigated as part of this unique long-term study.

The scientific goal of the bilateral cooperation project “Effects of Agricultural Management Practice on Soil Microorganisms” (ELMAB) is to find out how soil treatment and the resulting harvest affect the structural and functional diversity of soil microorganisms. This knowledge is essential for implementing measures suitable for preserving the performance of agricultural soil in the long term.

This international cooperation has significant added value for farmers and soil microbiologists alike. The results of the ELMAB project are therefore awaited with great interest. There are also clear synergies with ongoing projects being realised by the Julius Kühn Institute ( JKI) and the Centre for Soil Research (BonaRes).

Half of the “Direct Seeding Since 1987” area has been tilled since 2012. Half of the “Conventional Treatment with Ploughs” area is now being subjected to direct seeding. As part of the mobility project subsidised by the BMBF, the investigations are focusing on the areas that have undergone almost 30 years of direct seeding or tillage. This new experimental set-up has raised exciting questions: how long does it take for soil to react to changes in the way it is treated? Which groups of microorganisms could serve as indicators for substance cycles or other ecosystem functions? Researchers and farmers anticipate that investigations of the “Monumento Histórico” soil will yield information relating to the way in which agricultural soil treatment influences harvests, biodiversity and the ecosystem functions of soil. The results will not only be published in scientific journals, but will also be presented to farmers. A multidisciplinary project involving microbiologists, soil scientists and farmers that is currently in the planning phase would facilitate a new quality of soil research as part of the BMBF funding program “Bioeconomy International”.