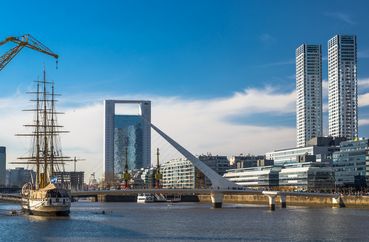 A variety of funding options within the framework of bilateral cooperation in education and research supports the exchange of scientists. Open BMBF funding opportunities can be found under current announcements. Please note that due to the COVID-19 pandemic the funding projects are suspended for the time being.

For more information on funding opportunities go to funding the cooperation with Argentina.

Argentina is one of Germany's partner countries in South America, alongside Brazil and Chile. Both countries share a long history of bilateral scientific and technological cooperation. This partnership is based on a 1969 intergovernmental agreement. The Argentinian cooperation partner is the Ministry of Science, Technology and Innovation (MINCyT), which was established in December 2007.

The core areas of Science and Technology Cooperation (STC) are determined by a mixed commission, which last met in Berlin in April 2019. The next STC commission meeting is scheduled to be held in Buenos Aires end of 2022.

Intensive cooperations between Germany and Argentina exist in a wide range of scientific fields, such as biotechnology, medical and agricultural applications. In addition, Argentina is also a very important partner within the BMBF programme 'Bioeconomy International'.

One of the most important and active foci of the cooperation is Climate-relevant Antarctic research. The German initiative of the Alfred-Wegener-Institute (AWI), Helmholtz Centre for Polar and Marine Research, is a leader in this field. Joint research cruises on the research vessels Sonne and Polarstern, as well as work at the Argentine Antarctic Station Carlini (formerly Jubany) and its Dallman laboratory, form a core part of the cooperation on the Argentinian side. The follow-up agreement on scientific cooperation was signed at the Dallman Laboratory in 2006, extending the cooperation that has existed since 1994. A BMBF-funded workshop to intensify the cooperation between AWI and the Argentine Council for Science and Research (CONICET) took place in Buenos Aires in October 2014. Since 2017, the BMBF has been funding the AWI project Dynamo for climate research in Southern Patagonia.

The Pierre Auger Observatory is the world's largest facility for measuring cosmic rays of the highest energies. It is located in the Argentine Pampas. In addition to the Karlsruhe Institute of Technology (KIT), the universities of Aachen, Karlsruhe, Siegen, and Wuppertal as well as the Max Planck Institute for Radio Astronomy in Bonn are also involved in the Pierre Auger experiment.

Another area of cooperation is the long-standing partnership between German and Argentinian institutions in the field of geosciences. Since 2016, the GFZ German Research Centre for Geosciences (Helmhotz Centre Postdam) has led the DFG International Research Training Group 'SuRfAce processes, TEctonics and Georesources: The Andean foreland basin of Argentina (StRaTEGy)'.

On the occasion of Argentina's bicentennial independence celebrations, the so called 'Bicentenario', the MPG's Science Tunnel, funded by BMBF and MINCyT, was exhibited in Buenos Aires in March and April 2010. More than 45,000 visitors viewed the science exhibition, including many school classes from Buenos Aires.

At the time of the 'Bicenternario' celebrations, the idea of establishing a German-Argentinian Higher Education Centre (DAHZ) was promoted by both sides. A corresponding declaration of intent was signed on 8 March 2010 by former German federal minister Guido Westerwelle together with the Argentinian Ministry of Education (MinEdu), the Ministry of Research (MinCyT), the German-Argentinian Science Foundation (ACTAA) and the DAAD.

The coordination office in Buenos Aires was opened in September 2010 and in January 2011, the German coordination office at the DAAD in Bonn started its work. At the moment, a total of 31 projects are funded through the DAHZ, involving 50 universities (28 in Germany and 22 in Argentina).

At two bilateral workshops on 'Marine and Polar Research' (December 2016 and 2017), long-term cooperation priorities were defined and various research activities initiated (including joint cruises on the rsearch vessels Sonne, Polarstern and Austral).

Funding the cooperation with Argentina

Since 1999, bilateral Science and Technology Cooperation (STC) with Argentina has developed steadily. Current topics of common interest include environmental research and technology, marine and Antarctic research, biotechnology, medicine, nanotechnologies, as well as information and communication technologies. In 2013, engineering sciences were added as a bilateral funding priority.

Joint project calls are important for Argentina as a catalyst for the domestic research landscape. There continues to be particular interest in collaboration in Antarctica. Joint announcements for mobility projects are published annually by BMBF and MINCyT.

Upon application, grants can be awarded for mobility and initiation measures as well as for the establishment of scientific collaborations. In addition, further measures can be financially supported in individual cases. The main topics of bilateral cooperation with Argentina are: Bioeconomy and biomedicine, environmental research and geosciences (incl. marine and polar research), as well as engineering sciences (incl. information and communication sciences).

The exchange of scientists in international cooperation projects is strongly promoted as part of the bilateral education and research cooperation between Germany and Argentina. Upon application, grants can be awarded for mobility costs within the framework of a bilateral cooperation project (mobility projects). In individual cases, bilateral workshops on topics of strategic interest can also be funded.

As a rule, support is provided in the form of mobility grants and grants in kind. In principle, the BMBF will subsidise the costs of the German project participants via the International Bureau at DLR Projektträger (DLR-PT). The costs of the Argentinian side are borne by the Ministry of Science.

Applications for STC projects can only be submitted after a prior funding announcement and within certain deadlines. The funding announcements contain bilaterally agreed thematic priority areas - with reference to BMBF specialist programmes - and are usually published annually. The application must be submitted together with the foreign partner, both to the International Bureau at DLR Projektträger (DLR-PT) and to the Argentine partner authority (MINCyT).

Bilateral funding announcements for cooperation with Argentina can be found, if currently available, under current announcements. Before applying, please get in touch with scientific officer Jonas Kliesow at the International Bureau.

Next funding announcement: Fundigs are currently suspended due to the Covid-19 pandemic. Your Argentinian partner will find information on MINCyT's corresponding programme in Argentina on the ministry's website.

Initiation measures in thematic areas of particular interest to the BMBF

Together with the International Bureau, bilateral workshops can be financed in individual cases on topics of particular strategic interest to the BMBF.

These workshops should aim to bring together partners in research areas that are related to the BMBF's specialist programmes and the European Framework Programme for Research and Innovation. As a rule, support is provided in the form of mobility grants and, in special cases, grants in kind (related to the preparation and implementation of the workshop). The conception and preparation of such workshops takes place in coordination with the BMBF. Therefore, please contact scientific officer Jonas Kliesow at the International Bureau before drafting your application.