Brazil produces large quantities of biological raw materials, and uses them to make products such as the biofuel ethanol. It has therefore  become a relevant partner of German bioeconomy research. The two countries work together on many scientific topics. Cooperation priorities include environment and sustainability research as well as resources and circular economy. Brazil is Germany’s most important partner in education and research cooperation in Latin America. 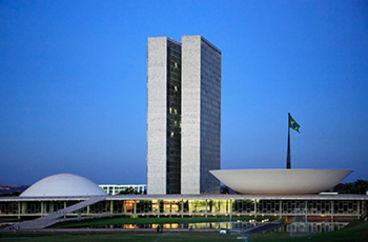 Funding the cooperation with Brazil

Within the framework of the bilateral cooperation in research, technology and innovation, the research cooperation between Germany and Brazil is supported by various funding instruments.

Several BMBF programmes are open to German-Brazilian research consortia. Currently, a number of projects with Brazilian participation are being funded, particularly in environmental, sustainability and bioeconomy research. Brazil is one of the priority countries of the 'Bioeconomy International' call.

Alongside national funding institutions such as CNPq, CAPES and FINEP, the Brazilian research funding landscape also includes research sponsors at state level such as FAPESP in São Paulo, for example. Germany is collaborating with all of the institutions mentioned above.

Brazil is the eighth largest economy in the world. In recent years, Brazil has expanded its role in shaping regional and global policies. The country has also stabilised economically. Its relationship with Germany has a broad foundation. Around 1,600 German companies reside in Brazil and generate around 10% of the industrial gross domestic product. Greater São Paulo is the world’s largest German industrial location outside Germany.

Ties with developing Latin American nations on matters of research, technology and education are being systematically strengthened by the German government. The 'Action plan of the German-Brazilian Strategic Partnership' highlights the Science and Technology Cooperation (STC) as an important pillar of the relationship between the two countries.

The STC with Brazil is based on a framework agreement on research and technological development, revised in 1996. Both governments meet regularly to agree upon the goals of future cooperation. At these meetings, the BMBF establishes the key areas of cooperation in dialog with the Brazilian partner ministries of science and education. In 2015, government consultations were held at the highest level between Germany and Brazil for the first time. In this context, five joint declarations on the central areas of cooperation were signed.The priorities of the Ministry of Science MCTI for the areas of research, technology development and innovation in the period 2020-2023 were published in 2020 in a legislative decree (Portaria No. 1.122). The prioritisation is intended to give new impetus to those sectors that contribute to Brazil's social and economic development.

The following technology areas have been declared as priority areas:

Focus of the German-Brazilian cooperation

Priority topics for the cooperation are determined by the Federal Ministry of Education and Research (BMBF) in discussion with the Brazilian MCTI (Ministry for Science, Technology and Innovation) and jointly with the MRE (Ministy of Foreign Affairs) and MEC (Ministry of Education). The Joint Commission on Cooperation in Science, Technology and Innovation last met in November 2020. The steering body, known as the STC Commission for short, met in a virtual format for the first time. Future joint activities were discussed in four working groups on the topics of 1) Bioeconomy; 2) Applied Technologies; 3) Life Sciences and Health Research; and 4) Climate and Sustainability Research.

The STC with Brazil focuses on the fields of bioeconomy, biodiversity, resources and circular economy, climate and sustainability research, social and human sciences and also the cooperation in university education.

The BMBF has sponsored the construction of the atmosphere observation tower ATTO (Amazonian Tall Tower Observation Facility) in the heart of Brazil’s Amazon region with EUR 5.2 million. The tower is 325 metres high and was built under difficult conditions in the rainforest. A great expense that should pay off in the long term. Since 2017, German and Brazilian scientists have used the highly sensitive measuring equipment to observe the relationship between the climate, atmospheric chemistry and the rainforest. The findings will enable us to better predict developments of our climate in the future.

Metals and minerals are finite resources. In many technologies, such as electromobility or wind power generation, raw materials like rare earths are indispensable. Brazil is an important producer of metals. This is why Brazil and Germany have agreed to intensify research cooperation into raw materials of strategic economic importance. As part of its 'Research for Sustainable Development' programme, the BMBF is funding several German-Brazilian projects that promote the responsible use of natural raw materials. For example, a research network is investigating the recycling of high-grade metals in the steel industry.

Research for a bio-based economy

Large quantities of renewable raw materials such as sugar cane, soy or wood are grown in Brazil. Brazil’s many years of experience in manufacturing and using ethanol as a biofuel are important for Germany.

A workshop on 'Value created from biological resources' in São Paulo and a fact-finding mission funded by the International Bureau (IB) were starting points for a German-Brazilian initiative in bioeconomics. The IB supported the BMBF in identifying topics and partners to internationalise the strategy 'Bioeconomics 2030' in Brazil. Since 2014, the German Federal Ministry of Research has funded 20 projects with Brazil in the context of the funding programme 'Bioeconomy International'. The two countries intend to further expand their collaboration in this area.