Canada is an important partner for Germany. A science and technology cooperation treaty was agreed as early as 1971. The Canadian government and public pay close attention to German research and innovation policy. Canada’s science funding is currently focused e.g. on supporting Canadian companies in global markets. 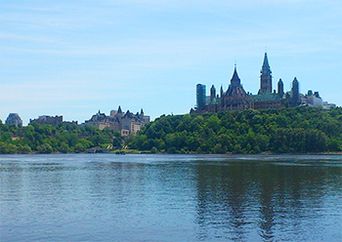 In individual cases, areas which are of strategic interest to the German Federal Ministry of Education and Research (BMBF) can receive financial support for exploratory and networking measures.

Current BMBF funding opportunities can be found under current announcements.

Germany is one of the few countries with which Canada concluded an intergovernmental agreement regarding scientific and technological collaboration early on. The agreement came into force on 30 June 1971 and has led to a dynamic bilateral collaboration in science and technology. The celebration of the 50th anniversary of the S&T agreement took place on 7 May 2021 in Berlin and virtually.

The Canadian ministry 'Global Affairs Canada' is in charge of the bilateral cooperation. The ministry 'Innovation, Science and Economic Development Canada' (ISED) is responsible for the research and innovation related policy. Bilateral meetings on scientific and technological (S&T) cooperation take place between the federal governments of Germany and Canada approximately every two years . The priorities and research areas of the cooperation are agreed upon at these meetings.

Over the course of the collaboration, the key areas of cooperation have been adapted to the national priorities of both countries, and currently focus essentially on the following areas:

A focal point of joint interest is plant genome research. As part of the BMBF's funding initiative 'Bioeconomics International' several projects with Canadian partners have been funded since 2014.

Germany and Canada are strategic partners in the field of fuel cell research. Since 2007, the BMBF has continuously funded bilateral collaborative projects and has invested around €15 million in this cooperation so far.

The German Aerospace Centre (DLR) is cooperating directly with the Canadian Space Agency (CSA), the Canada Centre for Remote Sensing (CCRS) and various universities. The focus is on communal use of radar data and reciprocal use of ground stations.

In neuroscience, German and Canadian scientists are collaborating intensively and productively, primarily within the framework of European initiatives, e.g. the ERA-NET NEURON ('Network of European Funding for Neuroscience Research'). Canadian partners are also involved with the 'Centres of Excellence in Neurodegeneration (COEN)' and the 'Joint Programming Neurodegeneration (JPND)', both of which are first and foremost initiatives of European nations.

For the first time a bilateral funding measure on the topic of 'Advanced Manufacturing – Industrie 4.0' could be started in 2018 through a cooperation of the National Research Council of Canada, the Natural Sciences and Engineering Research Council of Canada (NSERC) and the German Federal Ministry of Education and Research (BMBF). This first bilateral call for proposals has so far been followed by two others in collaboration with the National Research Council (NRC) on the topics of artificial intelligence in production technology and green hydrogen.

The bilateral cooperation between the governments and the research and development institutions in Germany is supported by the International Bureau (IB). The International Bureau is involved in preparing calls for proposals and supports ongoing research projects scientifically and administratively. In addition, the IB supports BMBF with the preparation of workshop, information events and talks in an international context.