This page is currently being updated. Come back soon!

Mexico offers enormous potential for cooperation and has a special position among Germany's partners in Latin America. This is due both to Mexico’s regional importance and economic power and to the traditionally close cultural and economic ties between the two countries. Mexico is aiming to be ranked among the top 20 per cent of the world's most competitive countries by 2030. 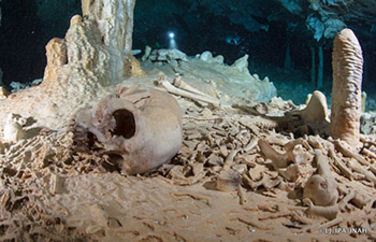 Within the framework of bilateral cooperation in research and education, the exchange of scientists between Germany and Mexico in collaborative projects is supported by various funding instruments.

Further information about the Science and Technology Cooperation (STC) between Germany and Mexico is available here.

Mexico is one of the BMBF’s priority countries in Latin America. Germany has maintained a close and successful cooperation in research, science and education for many years now. This cooperation is based on the joint inter-governmental agreement on scientific and technological cooperation (STC) of 1974. The political responsibility in Mexico lies with the Ministry of the Exterior (SRE) and the 'Instituto Mexicano para la Cooperación Internacional' (IMEXCI) founded in 1998.

On behalf of the foreign ministry, the Mexican National Council on Science and Technology (CONACYT) is the coordinating and funding authority for the STC. CONACYT is the most important technical partner of the BMBF. The 2002 Science Act turned CONACYT into an independent authority reporting directly to the president.

The research cooperation projects are bilaterally financed by the BMBF and the Mexican research council CONACYT. In the joint projects, each side covers the expenses for their respective scientists.

For the period 2013-2018, the National Development Plan (Plan Nacional de Desarrollo 2013-2018, PND) provided general orientation to the national science and innovation policy, while the Special Program for Science, Research and Innovation 2014-2018 (Programa Especial de Ciencia, Tecnología e Innovación 2014-2018 – PECITI) indicated key research and innovation policy objectives such as increasing knowledge transfer and improving regional development and R&D intensity of 1 % by 2018. Amongst other things, innovation in enterprises and a more important role for R&D in social development have been promoted. In retrospect, however, the aim of increasing R&D investment was not achieved. Currently, a new National Development Plan (Plan Nacional de Desarrollo 2019-2024, PND) is being prepared for the upcoming period.

During the meetings of the bilateral commission (STC), BMBF together with the Mexican Foreign Ministry (SRE) and the 'Instituto Mexicano para la Cooperación Internacional' (IMEXCI) agree upon future cooperation priorities. The STC with Mexico focuses on environmental research, climate and sustainability, aerospace technology, life sciences and bioeconomy, as well as on  cooperation in university education and vocational training.

The cooperation strives to enhance the role of education and research in innovation processes. To achieve this goal, SMEs will be more effectively integrated into bilateral R&D collaborations in the future. In 2016, BMBF and CONACYT published a so-called '2 + 2' call for innovative and applied research projects. Currently, six German-Mexican joint projects are funded in the fields of biotechnology and health research, materials research and nanotechnology. In each project, one German and one Mexican SME as well as one German and one Mexican research institution are participating partners.

In addition, since 2018, the BMBF and the SEP have been strengthening their cooperation in higher vocational education and dual higher education. The aim is to promote the permeability between initial and technical training (technicians, masters) and technical, academic education.

In Mexico, the German Aerospace Centre (DLR) closely cooperates with the Mexican authorities and research institutions as well as the European Agency for Space Travel, ESA. Together, they have set up a data receiving station in Chetumal on the peninsular of Yucatan. This station can be used to receive and analyse information sent by satellites. As such, it will contribute to environmental protection in Mexico and neighbouring regions. In addition, it enables quicker and more targeted action in response to natural disasters such as fires or flooding. In 2014, ownership of the ground receiving station was passed to the Mexican Agency for Space Travel, AEM. AEM is now also responsible for operating and maintaining the station, while the DLR continues to support the research activities.

Germany and Mexico are jointly contributing to climate protection. They have formed the 'German-Mexican Climate Protection Alliance' to support the Mexican government in developing and implementing its climate protection programme. 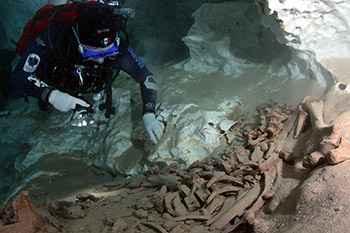 An outstanding German-Mexican research project headed by the University of Heidelberg focuses on 'Prehistoric Finds from the Pleistocene-Holocene Transition Period in the Underwater Caves of the Yucatán Peninsula'. This project, which was funded until 2018 by the Federal Ministry of Research, has led to new surprising discoveries about the peopling of the American continent. Until now, scientists believed that humans first migrated to North America via the Bering Strait 11,000 years ago and then settled on the continent. New discoveries of fossils from the caves below Yucatán challenge this hypothesis. The results of the research so far suggest that humans already lived in Mexico 13,000 years ago - thousands of years before the high culture of the Mayas. It is not yet clear where these settlers came from.

The scientific work and findings have already been presented to the public and are exhibited in museums. Exhibitions took place at the State Museum of Natural History in Karlsruhe (SMNK) and at Mexico’s largest natural history museum, MUDE, in Saltillo.

The German Higher Education Consortium for International Cooperation (DHIK) is receiving a five-year funding by BMBF until the end of 2019 to expand the cooperation with the Mexican university ITESM (Instituto Tecnológico y de Estudios Superiores de Monterrey). The DHIK, based in Mannheim, includes 28 German universities. As part of the Mexican-German university cooperation (MDHK), seven joint bachelor's and master's degree programmes have been introduced in fields such as mechanical engineering, electrical engineering, automotive engineering, mechatronics and industrial engineering. Students from both countries can simultaneously earn both a German and a Mexican university degree. Industry partners are also involved in order to prodive the students with hands-on practical training.

Funding the cooperation with Mexico

To support networking, BMBF publishes calls for proposal every year together with the Mexican partner, CONACYT. Funding allows research groups from Germany and Mexico to collaborate in joint projects and to exchange researchers. Furthermore several research projects are funded by the technical departments of BMBF. DAAD and DFG also have designated funding programmes with Mexican partners.

The bilateral cooperation between the governments and the research and development institutions in Germany are also supported by the International Bureau (IB).

Scientific and Technological Cooperation (STC) between Germany and Mexico

Within the framework of the bilateral cooperation in education and research between Germany and Mexico, the exchange of scientists in international collaborative projects will be funded. Upon request, allowances can be granted for staff, mobility and material costs within the framework of a bilateral cooperation project (research funding programme). In individual cases, bilateral workshops on topics of strategic interest can also be supported.

As a general rule, support will be given in the form of staff and mobility aid and grants. This means that the IB generally subsidises the costs of German project partners.

Applications for the research funding programme can only be submitted in the context of a funding announcement published by the BMBF. Funding announcements include bilaterally agreed key areas of focus – with regard to BMBF specialised programmes – and are usually published annually in summer. The funding programme stipulates that at least one partner each from Germany and Mexico jointly develop an application, which the German partner must then submit to the International Bureau (IB) and which the Mexican partner must then submit to the competent Mexican partner organisation (CONACyT).

Currently open funding announcements contain further information on the priorities and application process. Before submitting an application, we recommended to contact the scientific contact person at the IB, Dr Inge Lamberz de Bayas.

Your Mexican partner can find information on the corresponding programme by the Mexican National Science and Technology Council (CONACyT) at the programme website.

Measures to initiate themes of particular interest to the BMBF

In coordination with the International Bureau, in individual cases, bilateral workshops on topics that are of particular strategic interest to the BMBF can also be fiunded. These workshops are to be geared towards bringing together partners in research areas relating to specialist programmes of the BMBF and of the European Framework Programme for Research. As a general rule, support will be granted in the form of mobility aid and, in special cases, grants (in connection with the preparation and implementation of the workshop).

The conception and preparation of such workshops will take place in coordination with the BMBF. Hence, please contact IB specialist  Dr Inge Lamberz de Bayas before applying.