Costa Rica aims to be climate-neutral by 2021 – an ambitious target. This Central American country has been focusing on environmentally friendly development and the sustainable use of natural resources for some years. Satellite observations of the Earth can document the development of land use and the condition of protected areas.

After clearance work stopped at the end of the 1980s, the tree cover in Costa Rica grew from 20% to more than 50% of the country. However, Costa Rica’s agricultural industry is also growing and currently covers around 40% of the country: between 2000 and 2012, for example, the area used to cultivate pineapples grew sixfold.

This information was obtained with the aid of the European Earth observation program Copernicus. Copernicus guarantees the long-term availability of satellite data, thus supporting politics, companies and administration in the long term by helping them create an objective information base for tax measures.

Topics in common include monitoring protected areas, which account for one quarter of Costa Rica's land surface, calculating the country’s climate balance and evaluating the influence of agriculture on natural ecosystems. The beneficiaries are the environmental authorities in the region that are integrated into the ongoing development processes. 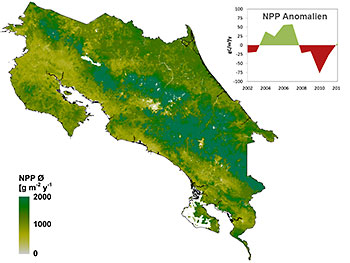 MONROSA uses time series of satellite sensors to calculate biomass production in Costa Rica. These calculations constitute the basis of the country’s carbon balance. The illustration shows the net primary production (NPP) of biomass for Costa Rica during the years from 2002 to 2012. The dark green areas show the high productivity of Costa Rica’s densely forested mountain regions. The dry and cloud forests in the north-east achieve similar NPP figures. Comparing the NPP figures for individual years with average production over several years facilitates the detection of trends or exceptions. Production sank to well below average between 2008 and 2012, for example, an effect associated with the El Niño phenomenon of 2009 followed by La Niña in 2010. Positive anomalies are evident between 2003 and 2008. If developments are observed over lengthy periods, it is possible to make assertions about the effect of climate change on the various natural ecosystems influenced by man and thus also on the development of biodiversity. 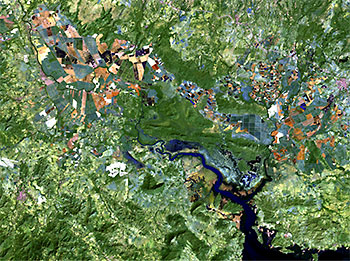 The natural wetlands along the Rio Tempisque and Rio Bebedero are increasingly being taken over by farmland (satellite image: Sentinel-2, January 2016).

Several factors have to work together if Copernicus data is to be used successfully in Costa Rica and Central America: high-performance IT solutions, scientifically sound data processing and product development must be optimally attuned to the ecological, socioeconomic and political circumstances in Costa Rica and the region. To this end, the Federal Ministry of Education and Research is supporting cooperation between scientific institutions in Costa Rica and the German Aerospace Center (DLR).

Originally, MONROSA was to use observations of the Earth and site surveys to monitor tropical forests in Guanacaste’s protected area of Santa Rosa. After obtaining the first and very promising results, the project partners quickly identified other scientific areas that would benefit significantly from Copernicus.

The resulting project proposal MONEO (Monitoring the Neotropical Environment through Earth Observation) bundles geoscientific activities and developments in and with Costa Rica using the European space program Copernicus, lays the technical foundations for processing the enormous quantities of data supplied by Copernicus, and thus paves the way to establishing Earth observation services for Latin America and the Caribbean.

The most important Costa Rican partner is the National High Technology Center (CeNAT), funded by all the country’s universities. 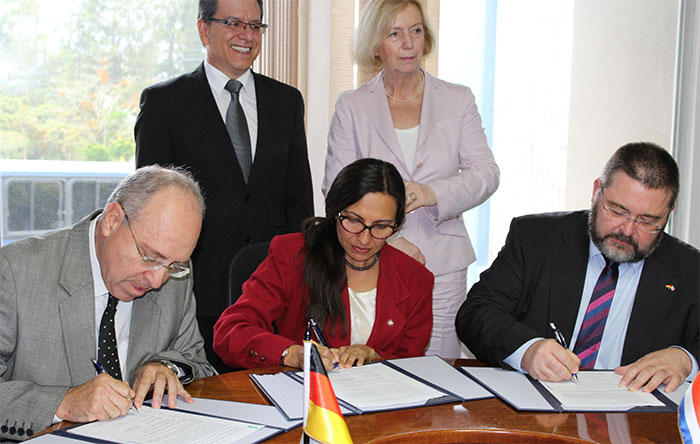 Representatives of CeNAT and the Earth Observation Center signing the agreement at the TEC during Federal Research Minister Wanka’s visit (February 2016). © DLR (EOC)

DLR and CeNAT intensified their close cooperation in the field of earth observation by concluding a cooperative agreement that was signed in February 2016 in Costa Rica in the presence of Federal Minister of Research Johanna Wanka. Along with scientific and technical cooperation, dialogue between scientists is also to be intensified. The project may come to a successful conclusion in August 2016 after a two-year period.

All stakeholders will benefit from this international partnership. The DLR scientists in Germany will have the opportunity to adapt their processes to local conditions by drawing on the regional knowledge of their Latin American colleagues. This will make the processes more robust, making them suitable for use in global monitoring. In turn, Earth observation services will be provided for Costa Rica and Central America with the assistance of the Earth Observation Center (EOC); these will primarily be fed by the free data stream from Copernicus. International partnerships of this calibre testify to the DLR’s leading role in the Copernicus program. The exchange of up-and-coming researchers is strengthening Costa Rica’s pioneering role in the field of technology and deepening the close climate partnership between Germany and Costa Rica.