Radiance emitted by the sun undergoes significant changes and becomes spatially scattered as the result of various atmospheric processes, particularly clouds. Before the project got under way, these changes could only be measured in terms of angle of incidence and wavelength with the use of relatively slow measuring devices.

Depending on the degree of precision, the time required for measurements from more than 100 directions varied from 15 minutes to one day – time spans during which solar radiance undergoes significant changes. One of the project's goals was therefore to develop a fast measuring device with which sunlight, or more precisely spectral radiance, could be measured simultaneously from all directions in just one second. After a period of over two years, the German-Chilean project was finally concluded in February 2016.

Particularly in the Antarctic, snow is able to reflect up to 100% of the solar radiance that strikes it. People, animals and plants in cold regions are therefore exposed to significantly higher levels of radiation than those in regions with comparatively little snowfall. Snow reflection, which in time is radically modified by ageing processes, was therefore also recorded in the Chilean Andes as part of the project. Radiance and snow reflection are extremely important for understanding climate change.

The uses to which the newly-developed measuring device can be put include solar energy applications (e.g. for the optimum orientation of photovoltaic systems and the development of new test procedures for solar cells), medical applications (e.g. determining the degree of exposure that influences vitamin D levels in humans), detecting trace gases in the atmosphere, research into materials ageing (e.g. the ageing of façades facing in different directions), and new studies of the connection between radiance from various directions and plant growth in fruit and vegetable farming.

Studies of changes in the reflective properties of snow are important for understanding local water balance and snow melting processes, e.g. in arid areas such as Chile and the nearby Andes. They are also essential for understanding changes in the global climate, particularly in polar and high mountainous regions. Chile offers almost perfect research conditions in this respect due to its north-south orientation, the snowfall in the Andes and its proximity to the Antarctic.

An international comparison of measuring devices performed by the NDACC (Network for the Detection of Atmospheric Composition Change) facilitated checks and comparisons of the stringent demands and degrees of precision required from the devices used. Synchronised measurements of radiance revealed that both the German reference device and the Chilean partner device normally showed deviations of less than 5 percent. This has facilitated the incorporation of Chile into a global measurement network of comparable quality. Thanks to its development of the fast new measuring device, the Leibniz University in Hanover has now assumed a pioneering role in this area.

The methods of measuring and analysing snow pollution learned during the international cooperation can now also be used in Germany.  A new method of determining the particle content in snow has for example since been tried and tested as part of a snow collection project implemented by Chile, Germany and the US. This laid the foundations for further investigations into the role of radiation through snow contamination for a better understanding of climate change.

New insights: One measurement project in the Atacama desert involved measurements of spectral radiance at various locations and altitudes. At approx. 9 percent per kilometre, the increase in the UV range was comparable to that in the Alps. Preliminary analyses of the snow samples collected during the project showed that snow in central Chile was more heavily contaminated with black carbon than snow in the north of Chile.

New procedures: For the first time, a newly developed measuring instrument is facilitating simultaneous measurements of solar radiance from more than 100 directions in a matter of seconds. This means that rapid changes (e.g. as the result of changing cloud cover) can now also be recorded. A specially developed shadow screen that follows the position of the sun deflects the negative effects of direct solar radiation. 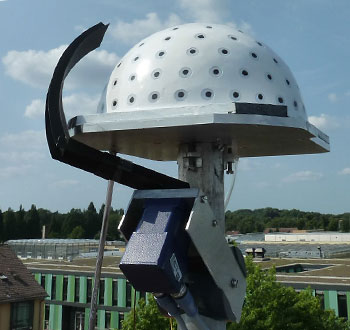 © Institut für Meteorologie und Klimatologie, Input optics of a new measuring instrument for measuring the radiation density in different directions with a unit for shade 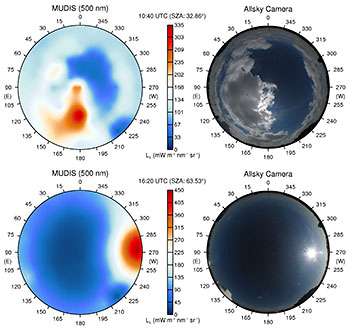 © Institut für Meteorologie und Klimatologie, Influence of clouds on the radiation field: Comparison of Radiation measurements of the novel device and images with a Fisheyekamera