Chile has the largest geothermal resources worldwide, mostly associated with active volcanism. Theoretically, nearly the entire electrical power supply of the country could be provided from aready known deposits. The MultiGeoEx project investigated usage options in the Southern Volcanic Zone of Chile.

Chile has the largest geothermal resources worldwide, including a remarkable number of active volcanoes. Theoretically, nearly all electrical power used in the country today (> 16 GWel) could be provided base loadable and with low carbon emission from already known geothermal reservoirs. In adition, the climatic diversity of Chile offers a wide range of geothermal uses.

For example, a new geothermal energy project for the mining industry was launched in the northern deserts. This energy carrier can also be used for water treatment, or in the central areas around Santiago and southern parts of the country, in addition to heat storage or heating. The city of Reykjavik (Iceland), which has suceeded in replacing fossil fuels by 95% using geothermal heat supply via district heating, could also set an example – particularly for the metropolitan region – on how to overcome today's air quality issues.

Current potential considerations in Chile focus on high enthalpy geothermal energy sources, which are only suitable for generating electricity, since they are often found in geographically remote areas, far away from any heat demand. In contrast, the BMGF-funded MultiGeoEx project carried out an exploration in the southern Chilean volcano zone to investigate the specific suitability of the subsurface with geophysical and geochemical methods.

The aim of the project was to determine the use options in the well-developed area around Pucón. The sensitive thermal water sources used for tourism were also recorded in order to prevent conflicts of use.

From the geological point of view, the work area is located at the junction of the northern tertiary sediments to the southern crystalline rocks (e.g. North Patagonian Batholith Complex). These crystal rocks extend over much of southern Chile, giving a good insight into the geothermal potential of this part of the country.

The MultiGeoEx project provides strong indications for a differentiated heat potential in the geological units with potential use of medium enthalpy deposits for heat generation:

Given conditions in Chile show strong similarities to the jagged geothermal systems in Germany. Thus, the Liquiñe-Ofqui Fault Zone found in the work area has analogies with the ones in the European rift system, including the Rheingraben. Here too, geothermal energy is extracted from the interfering reservoirs at temperature ranges of above 100 ° C.

The geo-scientific methods used in this project have been further developed and improved in Santiago, Chile, with the Chilean colleagues of the Universidad de Chile, UDC. New scientific and internationally significant findings were obtained for the evaluation of so-called geothermometers, which are used to determine the subsurface reservoir temperature. 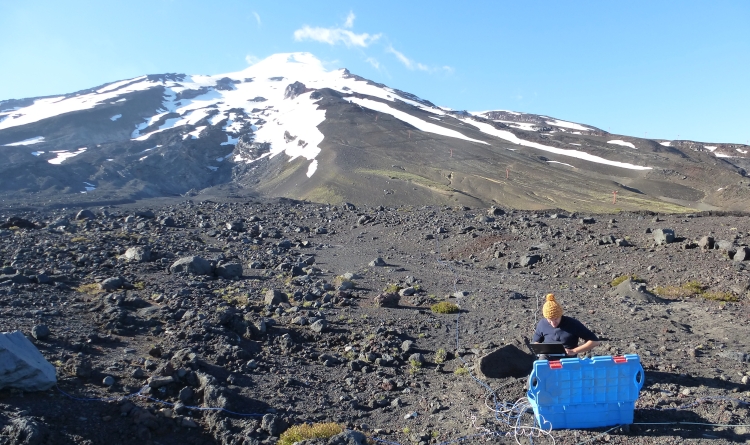 Laboratory experiments were carried out within the framework of this project to determine the suitability of individual calculations, by defining a characteristic application. The gained findings lead to a re-evaluation of this frequently used methodology and also attracted attention at international conferences, e.g. at Stanford University (USA). In cooperation with the Chilean partners, the results of this project have been published in selected high-ranking scientific publications. In the meantime, 2 doctoral studies at the KIT are about to be completed. Also 4 final workings (2 BSc, 2 MSc) were completed at KIT and UDC. A Chilean student could transfer to the KIT with the help of a DAAD scholarship.

With this project a strong cooperation with Chilean partners in science as well as industry has been established and strengthened. For the first time, medium-enthalpy deposits in southern Chile were characterised in terms of future development. Germany has profound experience and competence regadring this technology, gained – among others – in the many Bavarian geothermal energy projects. Under the assumption that air pollution would be regulated, geothermal energy could be used as a renewable energy source in the future.