Leishmaniasis is one of the world's six most significant tropical diseases, accounting for about 12 million cases worldwide. It is caused by single-celled parasites that are transmitted to humans by sandflies and are used as reservoirs by various animals. There has been a serious increase in leishmaniasis cases in Armenia and Uzbekistan for about 20 years. It is believed that the published figures do not reflect the full extent of the diseases.

The main objective of the project is to improve the diagnosis of leishmaniasis and to study the epidemiological situation in Uzbekistan and Armenia. The results should make a lasting contribution to the establishment of suitable monitoring methods and control measures. In particular, new insights into the origin and spread of leishmaniasis infections should be obtained, as well as a prognosis of the future spread of this disease due to global warming. To improve diagnostics, modern molecular methods were established in the target countries. Young scientists were trained both in Germany and locally. 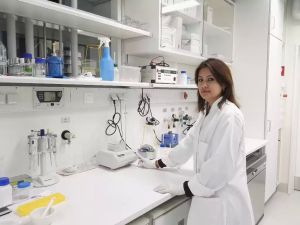 The establishment of modern molecular methods in the target countries enables a reliable, sensitive diagnosis of the disease. Through the use of these methods, the pathogen was first identified in Armenia down to the Arte level.

Microsatellite analyses allow the characterisation and differentiation of parasite genotypes found in these countries, allowing conclusions to be drawn on the origin of infections and the spread of the disease within the country, but also in the larger geographical context (e.g. Central Asia, South Caucasus, Middle East). Transmission cycles can now be examined more closely, i.e. infected sandflies can be detected. You can also determine which Leishmania species are transmitted by the occurring sandfly species. The role of animal reservoirs in the transmission cycle can also be clarified by means of these methods. The molecular methods can be used for studies on the incidence of disease in animals and the population. Extensive vector studies for the first time enable the creation of distribution models for leishmaniasis and the identification of risk areas in the future. In addition, a new diagnostic method was developed (ddPCR).

Pilot actions for partnerships in science, research and education with countries of Central Asia and the South Caucasus

There is a long tradition in the study of leishmaniasis in the research institutes in Samarkand (Isaev), Yerevan (Alexsanyan) and Moscow (Martsinovsky). These institutes have a history of about 100 years and were closely networked during the Soviet era. Many fundamental historical findings on leishmaniasis go back to world-class scientists from Uzbekistan and Russia. After 1990, a large part of their knowledge and experience was lost due to the departure of many renowned scientists, and cooperation and projects were discontinued. There was hardly any financial means to maintain, equip and modernise the institutes. Nevertheless, a lot of their experience could still be used, especially for field work.

The many years of working contacts and experience of Prof. Strelkova (Moscow) with research institutes in Central Asia and the South Caucasus have been of great help in assessing country-specific characteristics, establishing contacts, planning the project goals, and evaluating the results.

Last but not least, due to his own knowledge of Russian, extensive material previously published only in Russian could be employed.

The project enabled the establishment of a Molecular Diagnostics Laboratory at the Isaev Institute in Samarkand, Uzbekistan, and thus the first possibility for on-site molecular diagnostics. In Armenia, the pathogen was first genotyped. In addition, sandfly and field studies were conducted in Armenia and Uzbekistan..

Logo of the project @ TH Wildau

Several publications on the research results in Armenia and Uzbekistan have been published: on the history of the Parasitological Institutes in Samarkand, Yerevan and Moscow as well as on the new diagnostic method (ddPCR). In addition, there were several guest stays of young scientists from Uzbekistan and Armenia in Germany as well as young German scientists in the target countries.