Germany presented itself in another campaign initiated by the Federal Ministry of Education and Research (BMBF), which ran in Russia from 2012 to 2014 and was titled “Research in Germany – Land of Ideas”. The Russian Federation is a strategically important partner for Germany in education, research and innovation. 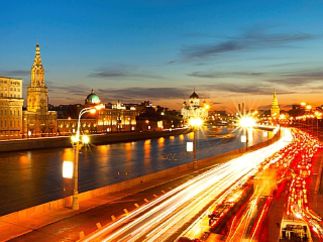 The science and research collaboration is a crucial pillar of German-Russian relations. These were reflected in the “German-Russian Year of Education, Research and Innovation” 2011/2012, which ended in celebrations in Berlin in May 2012. In addition to the Year of Science, a Russia Country Campaign was also launched in March 2012. The aim was to foster greater awareness of Germany as a location for innovation in the target region of Russia.

Germany was aiming to use the dedicated national campaign to present itself as an attractive partner in the fields of education, research and innovation, as well as to raise the profile of world-class German research and technology in Russia. Its thematic priorities were: nanotechnology, environmental technology/energy efficiency, health and optical technologies. Innovation networks and clusters of these priorities were selected in a funding competition, which supported the BMBF in increasing its presence in Russia and in intensifying its collaboration with Russian partners in many ways.

The networks and additional German research institutions, universities and funding organisations were active as representatives of German innovation performance in Russia for two years. In addition, several key measures are organised in the context of the campaign, including joint booths at important trade fairs in Russia such as “Open Innovations” in Moscow and expert trips to initiate contact and cooperation. The networks and research organisations view the Russia Country Campaign as positive. The funded projects in their areas gained valuable specialised and industry information, added wide-ranging personal contacts and expanded their networks to Russia.

„The City of the Future - the Future of the City“ - Developing pioneering ideas for cooperation at the BMBF conference in Ulyanovsk, Russia

Be it environmental protection, efficient traffic planning, producing energy whilst protecting resources or today's ageing society – the cities of the future all across the globe are being confronted with similar challenges. The key players from the fields of politics, administration, science and business need to work in close cooperation to be able to shape and manage the increasing growth of cities. At the German-Russian conference entitled "The City of the Future – the Future of the City" held on 10 June, the German Federal Ministry of Education and Research (BMBF) invited Russian and German scientists, representatives of local administrative authorities and experts in sustainable business in urban areas to exchange ideas and experiences. The event was organised by the International Bureau.

> more: „The City of the Future - the Future of the City“ - Developing pioneering ideas for cooperation at the BMBF conference in Ulyanovsk, Russia.

Russia and Germany share a long tradition of scientific co-operation. The “German Science Days” held in the Russia’s economic zone Tomsk have proved that this strong partnership will continue in the future. On the occasion of the 15th Tomsk Innovation Forum INNOVUS, from 21st to 23rd May, the German Federal Ministry for Education and Research (BMBF) invited scientists, students, representatives of the regional administration and local companies together with a delegation of German research networks to discuss future technologies, establish contacts and develop ideas for partnerships as part of its national campaign for Russia.