Be it environmental protection, efficient traffic planning, producing energy whilst protecting resources or today's ageing society – the cities of the future all across the globe are being confronted with similar challenges. The key players from the fields of politics, administration, science and business need to work in close cooperation to be able to shape and manage the increasing growth of cities. At the German-Russian conference entitled "The City of the Future – the Future of the City" held on 10 June, the German Federal Ministry of Education and Research (BMBF) invited Russian and German scientists, representatives of local administrative authorities and experts in sustainable business in urban areas to exchange ideas and experiences. The event was organised by the International Bureau.

The conference was held within the context of the 12th German-Russian Partner Cities Conference, held from 8 to 11 June. Sergey Morozov, Governor of the Ulyanovsk region, and Marina Bespalova, Mayor of Ulyanovsk, opened the conference together with the German Ambassador to the Russian Federation, Ulrich Brandenburg. German and Russian participants from the fields of administration, science and business worked together to devise new ideas for cooperation and discussed practical examples of sustainable city development. Representatives of several local authorities presented solutions and approaches for ensuring that development of cities is not only economically successful, but also environmentally compatible and socially sustainable. 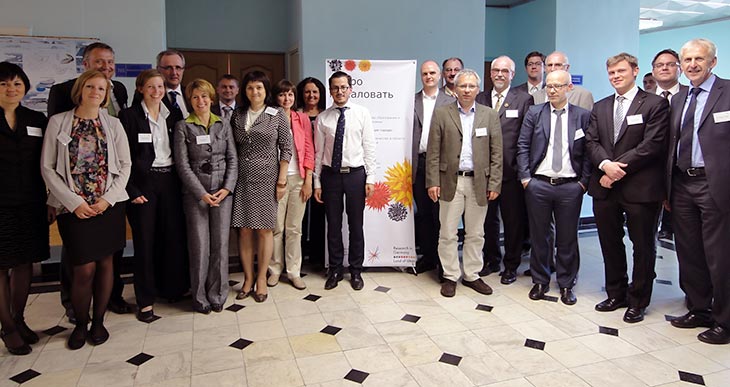 German representatives who were awarded prizes in 2012's "ZukunftsWerkStadt" funding competition for their pilot projects for increased sustainability exchanged ideas with the other participants at the event, discussing topics including the participation of citizens in realising renewable, decentralised energy supplies and extensive city development with the involvement of citizens. Following the talks by the local authorities, German companies and research networks presented their projects and initiatives for the "City of the Future".

In the concluding panel discussion, the latest perspectives for Russian-German cooperation in the field of sustainable city development were debated. Following an initial panel discussion round, the talks ended in an open dialogue between the speakers and audience members on the different experiences gained by and problems facing local authorities in Germany and Russia, as well as possible approaches for initiating collaborations, e.g. joint preliminary studies. The debate focussed on the topics of traffic, energy and climate protection, the participation of citizens in infrastructure measures, the redevelopment of industrial sites, environmental protection and the renovation of old buildings. However, lively discussions were also held on waste disposal regulations and the recycling systems used by local authorities in Germany, who follow a strict policy of waste separation and recycling.