For decades, Somalia has suffered violence through ongoing internal conflicts, hunger and natural disasters. 30% of its citizens are permanently displaced. The consumption of the addictive drug khat is widespread. This is associated with unusually high rates of psychiatric disorders. The project developed new sustainable prevention and care concepts especially for crisis regions and developing countries.

The state infrastructure of Somalia has been on the ground for decades. 30% of its 7.7 million citizens are permanently displaced and live under inhumane conditions in camps in their own or in the neighboring countries without the prospect of improvement .

In addition to violence through persistent internal conflicts, hunger and natural catastrophes, the consumption of the addictive drug khat is very widespread. 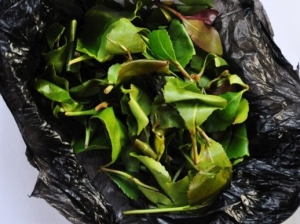 Khat, a drug which is chewed in Somalia and neighbouring countries.
© Dr. Michael Odenwald / Uni Konstanz

The amphetamine-like substances contained in khat can trigger e.g. paranoia and fits of violence. In 2010, the WHO reported on the health risks of the ever-increasing khat consumption and the unusually high rates of psychiatric disorders in the Somalian population, accompanied by a blatant lack of psychiatric care resources and structures, as well as of adapted prevention and care concepts. The aim of the funded project was to make a significant contribution to the closure of this gap in knowledge and care.

The project has contributed to the research area by developing new sustainable prevention and care concepts for crisis regions and developing countries, which lack skilled personnel and specialised hospitals for the treatment of mental disorders.

The results of the project help to close conceptual and knowledge gaps in the area of community psychiatric care that is adapted to the specific situation of Somali displaced persons. They facilitate the planning and implementation of preventive and care measures for this vulnerable population group.

The tools developed in the project can be used locally by various actors (government, NGOs) to provide medical care and prevention in acute and long-term humanitarian crisis situations, e.g. in refugee camps or in the slum areas of Somalian cities inhabited by internally displaced persons. In addition, the project contributed to policy development and concept education at a higher level. Indirectly, the results also contribute to the development of perspectives and thus are a step towards breaking the cycle of violence.

Collaboration with African partners led to the use of complementary knowledge for study planning, access to local networks, and finding suitable local staff. It contributed significantly to the implementation of complex studies in less accessible areas of Nairobi, where many Somali refugees live under difficult conditions and which suffer from a high rate of violence and crime. In addition, thanks to the cooperation with the local partner, professional and governmental organisations from Kenya and the entire region could be involved in the process. 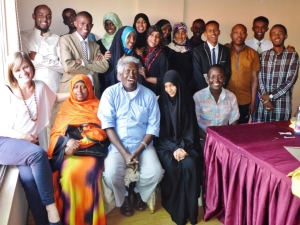 Local study team in Nairobi: College graduates from the Somali community were trained in a short intervention technique under the guidance of scientific and medical specialists, which enabled them to motivate Khat users to reduce their harmful substance use.
© Dr. Michael Odenwald / Uni Konstanz

The project developed and evaluated psychiatric prevention and treatment components, which can be effectively used in the community, using trained persons from different groups below the specialist level (general practitioners, laypersons). A manualised short-term psychotherapy (12 sessions) for the treatment of persons with simultaneous kath dependency and posttraumatic stress disorder by trained medical specialists was complemented by a short intervention of trained laymen for the preventive reduction of khat consumption. The results of the project show the high acceptance, the applicability under the difficult conditions on site and the effectiveness of these new tools, which as a next step should be tested in larger clinical trials.

At the end of the funding period the partners were able to organise an international workshop in which the results of their project as well as other projects in the region were discussed by a high-ranking international audience and ways of further cooperation were developed. Among the participants were representatives of African and non-African universities, state, international or professional policy organisations, African and European NGOs as well as psychiatric care facilities. During the workshop, the 'Nairobi Position Statement on Refugee and IDP Mental Health Care' was developed and adopted. The project also resulted in several other research initiatives and a high-ranking symposium at the annual meeting of the World Psychiatric Association in Berlin in 2017.