The German public were shocked by the outbreak of EHEC in 2011. At that time, Fenugreek seed, which was imported from Egypt, was identified as the source of infection. In this research project, scientists from Germany and Egypt investigated the occurrence of potentially pathogenic organisms on seeds, sprouts and herbs and which measures could be used for an effective suppression.

This research project was developed against the background of the 2011 outbreak of enterohemorrhagic Escherichia coli (EHEC) in Germany which brought the microbial colonization of seeds, shoots and vegetables to public attention. At the time, epidemiological studies traced the source of the infection to Fenugreek seed imported from Egypt.

For this reason, the joint project was proposed and implemented in cooperation with the University of Cairo. The objective was to evaluate the microbial quality of herbs, sprouts and seeds and to provide recommendations for the production and management to reduce risks in plant production. The research project SproutMOs aimed to answer the following questions:

The project results show that no potentially pathogenic Escherichia coli and Salmonella strains were found on the 8 plant species tested, irrespective of whether they had been produced in Egypt or Germany. These results have been published in scientific journals and used in trainings for consultants. The possibilities to reduce the germ infestation of seeds before sprout production shown in initial experiments need to be validated in further pilot studies before issuing practical recommendations.

The project findings contribute to assessing the food safety of freshly consumed salads, herbs and sprouts.

Our longstanding scientific cooperation with the faculty of agricultural sciences in Cairo on bacteria-plant interaction provided the basis for the risk assessment of plants produced in Egypt and Germany carried out within in the framework of the SproutMOs project. Plant and environmental samples from two production sites in Egypt and plant samples from German greenhouse cultivation could be analyzed and assessed collaboratively according to jointly validated, identical methods in both Cairo and Großbeeren. In addition to the knowledge gained, we were able to set up a molecular biology laboratory (Joint IGZ-GIZA Lab) at the Faculty of Agricultural Sciences in Cairo thanks to additional funding from the Alexander von Humboldt Foundation and the German Academic Exchange Service, conduct first student training courses at the IGZ and in Cairo, and ensure three bachelor and master student placements in Germany. 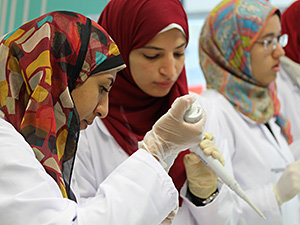 Training course for students at the University of Cairo.
© N. Hegazi

It was proven for the first time that it is very unlikely to find potentially pathogenic Escherichia coli and Salmonella strains occurring naturally on plants. Even after taking pre-enrichment steps and applying cultivation-independent methods (multiplex qPCR, 16S rDNA sequencing, metagenome sequencing), the target organisms were not detectable if the plants had been produced according to the guidelines of good agricultural practice and if no organisms had been introduced by external sources of infection.

In cooperation with the German Federal Institute for Risk Assessment in Berlin, the detection methods were validated on plant material and, as a final step, environmental microorganisms were serotyped. The e-ventus method for the decontamination of seeds that had been artificially infected with bacteria was tested in collaboration with EVONTA-service GmbH. Three scientific publications were published, eight lectures and posters contributed at scientific conferences, one dissertation and two Bachelor theses completed. In addition, two student training courses were conducted, with 16 and 18 participants each.