Numerous Egyptian representatives from science and research followed an invitation by the Arab-German Young Academy (AGYA) to the grand opening of the AGYA Regional Office in Cairo on 25 October. Since 2013, the Arab-German Young Academy has been supporting outstanding Arab and German junior researchers, who realise interdisciplinary research projects at the interface of science and society. The BMBF will support AGYA with an additional 3.3 million euros by January 2020. 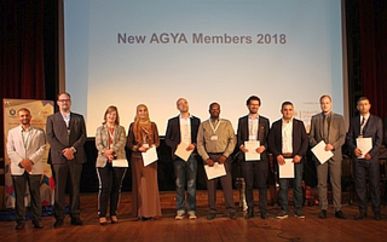 At the opening ceremony of the new AGYA regional office, Ministerialrat Peter Webers announced on behalf of the BMBF that the Ministry will support AGYA with an additional 3.3 million euros by January 2020. Peter Webers justified this decision with the 'dynamic development and outstanding networking performance through research collaborations of the AGYA members in Germany and the Arab world.'

The ceremony took place at the Salam Theatre in Cairo. In addition to the BMBF representative, the German Ambassador, representatives of the Egyptian Ministry of Higher Education and Research, the President of the Egyptian Academy of Sciences, the scientific offspring of the AGYA, representatives of the DAAD as well as of numerous Egyptian universities and research institutions participated in the event. In their opening speeches government representatives highlighted the dynamic development of AGYA as a successful interdisciplinary research network of excellent Arab and German junior researchers. The first generation of AGYA alumni were ceremoniously sent on their way; the new  AGYA young scientists officially welcomed and presented. 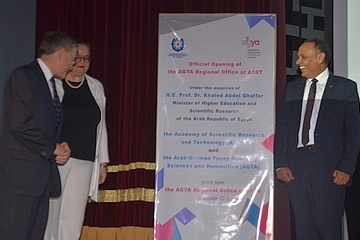 Opening of the AGYA regional office in Cairo © AGYA / ASRT

AGYA project manager Prof. Dr. Verena Lepper thanked the BMBF for its 'continued support for AGYA's growth and development', emphasizing: ‘The substantial budget increase of 3.3 million euros shows the appreciation of the amazing projects and the high commitment of the AGYA members. It allows them to continue working on this level and even to establish new project lines for the first Alumni that are going to be inaugurated as part of the festivities.’

The afternoon included a panel discussion on 'Women Empowerment in Science, Technology and Innovation'. Guest lectures by speakers such as the Sabine Behrenbeck from the German Council of Science and Humanities, Egyptian and German representatives from science, research and industry discussed the topic 'Visions of Empowerment: Best Practices and Innovative Strategies in the Arab World and Germany'. Finally, the Egyptian Academy of Sciences presented the research project 'Further Steps on the Path of Women's Empowerment in Egypt', which is funded within the framework of the EU funding programme HORIZON 2020, followed by a lively discussion among the invited representatives of German and Egyptian science and research organisations. At the joint dinner, all participants took the opportunity to exchange cooperation views and expertise as well as to network with the invited representatives from academia, science and research.

The new regional office represents AGYA in Egypt and Sudan and supports their activities in the Gulf region with the regional coordinator in the Levant. The increased visibility and presence of AGYA in 2018 was reflected, among other things, in the rising number of applications for AGYA membership from Sudan and Egypt compared to the previous year.

The Arab-German Young Academy of Sciences and Humanities was founded in 2013  at the Berlin-Brandenburg Academy of Sciences and the Academy of Scientific Research & Technology in Egypt as the first bilateral young academy worldwide. It currently offers over 50 members – made up of equal numbers of German and Arab scientists – the unique opportunity to develop and implement interdisciplinary research projects within the framework of Arab-German scientific cooperation. The members are excellent scientists (3-10 years after graduation) from a variety of academic disciplines. AGYA is funded by the German Federal Ministry of Education and Research and various Arab cooperation partners.