On 7 May, the German Federal Ministry of Education and Research, the Standing Conference of the Ministers of Education and Cultural Affairs, and the Federal Foreign Office held a joint conference titled 'China Competence in Germany'. Experts from the fields of schools, higher education, vocational training, adult education, science, business and politics were invited to discuss the need for a deeper and more comprehensive understanding of China in Germany and possible approaches to action. 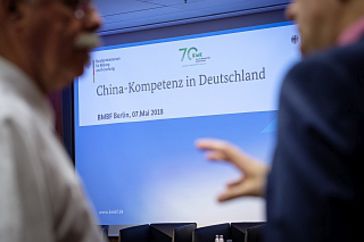 The international importance of the People's Republic of China is steadily increasing, not only in the area of politics and economy, but also in scientific and cultural fields. The German Federal Ministry of Education and Research (BMBF), the Standing Conference of the Ministers of Education and Cultural Affairs (KMK), and the Federal Foreign Office (AA) therefore intend to jointly promote and expand competence regarding China in Germany.

A large number of measures contributing to greater 'China competence' in Germany are already being implemented by the BMBF, the KMK and the AA within the scope of their respective responsibilities. In 2016, these government bodies and other partners, including the Chinese government, hosted the German-Chinese Year for Student and Youth Exchange. Since then, the BMBF has been funding several innovative concepts to increase China competence at German universities. In total, several million euros will be made available over four years.

As part of the conference 'China Competence in Germany', around 200 participants from the areas of schools, universities, vocational training, adult education, science, industry and politics discussed how China competence is currently conveyed in Germany and how it could be expanded. The results of the event will support BMBF, KMK and AA in preparing and implementing further tailor-made, coordinated and joint actions.

The discussion was based on the recent publication 'China kennen, China können. Ausgangspunkte für den Ausbau von China-Kompetenz in Deutschland (Know China, Know-how China. Starting points to build China competence in Germany)' by the Mercator Institute for China Studies (MERICS). The term 'China competence' includes above all language skills, but also general knowledge about the country and intercultural competencies; All of these skills are best acquired during stays in China.

The MERICS report highlights recent progress in promoting China competence. At the same time, it identifies a need to catch up in several areas. For example, comparatively few students in Germany learn Chinese, and the number of Sinology students at universities is low. The number of German students who are interested in a Chinese-related study and a longer stay in the country has been stagnating.

The specialist event 'China Competence in Germany' was organised and carried out by the DLR Project Management Agency on behalf of the BMBF.