Joint Declaration of Intent (in German)

Together and with new impetus, Germany and France want to advance Europe as an innovation hub ready for global competition. Federal Research Minister Anja Karliczek and her French counterpart Frédérique Vidal launched a joint package of measures at the 6th Forum on Franco-German Research Cooperation in Berlin. 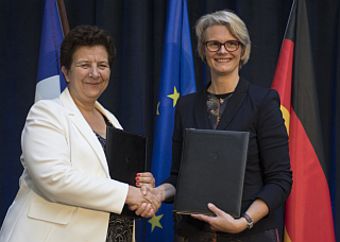 'Europe faces worldwide competition for the most innovative ideas and products, and our prosperity depends on that. With good cooperation in Europe, we can meet this challenge. Research and development give us economic prospects, and we want to work together more colsely. We are united by a clear vision for a European education, research and innovation area. At today's summit, we are launching a joint work programme for the next three to four years. The Europe of tomorrow stands for world-class networked excellence and technology leadership as well as for cross-border European university networks, enabled by a new European innovation architecture', said the German Federal Minister of Education and Research Anja Karliczek.

The two countries are planning a joint research network for artificial intelligence. 'We are convinced that Europe is an excellent location for future technologies, and together with France we want to play a pioneering role in the field of artificial intelligence', emphasized minister Karliczek. In addition, the cross-border mobility of learners and researchers in Europe should be further developed in the future.

The Joint Declaration of Intent signed by the two ministers at the Forum will also focus on new funding initiatives in energy research, research into antimicrobial resistance, civil and IT security research, and the humanities and social sciences. In addition, Germany and France want to cooperate for an excellence-oriented new European research framework programme to strengthen Europe's research and innovation power. The two ministers emphasized the common goal of Germany and France to strengthen the technological sovereignty of Europe, for example in microelectronics and leapfrog innovations, through joint initiatives. 'It is important to me that, in addition to national efforts, we also boost leapfrog innovations at the European level', said the Federal Minister of Research.

Following the research forum, the ministers continued their exchange on the European dimension of German-French cooperation during bilateral government talks in Meseberg. The results will be presented to the European Council.

The Fora on Franco-German Research Cooperation have taken place every three to four years since 2002 alternately in France and Germany. They facilitate encounters between high-ranking representatives of the research and funding institutions in Germany and France. Research and innovation policy strategies and priorities of Germany and France are being coordinated at highest level forums. The forums thus represent the central platform for coordinating the research and innovation actors of both countries. At the 6th forum, around 150 experts and high-ranking representatives from both countries, including the presidents of the research and intermediary organizations, discussed strategic core areas and new measures in their respective fields. Previously, expert groups had developed position papers on key topics of Franco-German research and innovation cooperation in an agenda process.

The political framework for bilateral cooperation in education and research is formed by the Franco-German Council of Ministers. Education, research and innovation efforts are regularly coorinated on a yearly basis, and priorities are outlined in a joint declaration.

At noon, the Joint Declaration of Intent  (French version) of the Ministers was published on the website of the BMBF.