Information on the cooperation with Israel

On 1 April, the 2019 'Award for Research Cooperation and High Excellence in Science' (ARCHES) was awarded at the German Federal Ministry of Education and Research in Berlin. Parliamentary State Secretary Thomas Rachel emphasized that this year marks the 10th time the prestigious prize is being awarded to German-Israeli junior research teams. 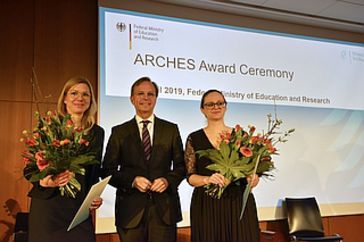 This year, the award has been given to the German-Israeli project 'The "start of a beautiful friendship?" – Comparative study of German and Israeli school NGO interactions across different socio-economic strata' from the field of humanities and social sciences.

'The ARCHES Award is an important building block in German-Israeli research cooperation,' said Research State Secretary Rachel, 'because joint research builds bridges and contributes to mutual understanding. The selected project, which compares the interaction between non-governmental organisations and schools in both countries, is cutting edge and highly relevant. NGOs are increasingly gaining public awareness worldwide, especially among young players who want to be socially involved.'

The award goes to two scientists, Dr. Miri Yermini from Tel Aviv University and Dr. Nina Kolleck from the Free University of Berlin.