As part of the current restructuring process of the Russian university and research landscapes, a "Russian Excellence Initiative" was launched in 2007 which aims to strengthen the roots of re-search at Russian universities and further develop their regional networks with the private sector. In a competitive process, a total of eight federal and 27 national research institutes were se-lected to receive additional funding of around EUR 125 million per university to achieve these goals over the coming years. 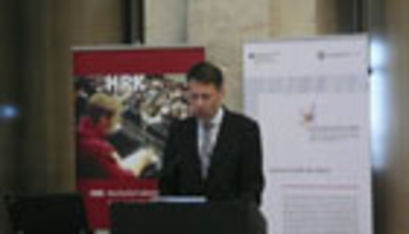 A delegation of around 30 Russian university presidents travelled to Germany in May to present the new top-level Russian universities in Germany and acquire partners for joint projects particu-larly from among the representatives of the German Excellence Initiative. "Russian Week" of-fered a platform for presidents of German universities to come together with representatives of sponsor organisations and companies. "Russian Week" took place from 21 to 23 May in Berlin within the context of the closing event of the German-Russian Year of Education, Science and Innovation 2011/12.

At the centre of "Russian Week" was a German-Russian Presidents' Forum hosted by the Fed-eral Ministry of Education and Research (BMBF), the Russian Ministry of Education and Research as well as the German Rectors' Conference (Hochschulrektorenkonferenz – HRK). Around 50 representatives of German and Russian universities discussed current developments in the uni-versity systems in both countries and shared ideas about the role of research at universities, the internationalisation of universities and cooperation with the private sector. The hosts, Dr Georg Schütte, State Secretary at the BMBF, and Professor Karl-Dieter Grüske, Vice-President of the HRK and President of the University of Erlangen-Nürnberg, underscored how important it is to encourage cooperation between young scientists in both countries for scientific partnerships. They are the most important contributors to future research partnerships between Germany and Russia. The university representatives agreed that dialogue needs to continue and greater focus needs to be placed in the future on issues such as quality assurance and recognising university degrees.

Russian university presidents also had the opportunity at "Russian Week" to talk to representa-tives of German sponsor organisations about different ways to support German-Russian scien-tific cooperation and to discuss new funding models. They also toured the Berlin-Adlershof technology park and finally, met with representatives of German companies. They talked to them about mutual expectations of collaboration. In the end, it became clear that many success-ful examples of vibrant partnerships between German companies and Russian universities al-ready exist. These partnerships also showed that both sides have to learn to understand the spe-cific needs and interests (e.g. different speeds) of the other for the partnership to be successful. German and Russian representatives of science and the private sector will have the opportunity to have more in-depth discussions at a large international innovation forum in Moscow in No-vember.

In summary, "Russian Week" made it possible for representatives of German universities and companies to learn about the Russian Excellence Initiative and its representatives. It also contrib-uted to a better understanding of the potential of the new Russian initiative for German-Russian cooperation. The top-level Russian universities are very interested in intensifying cooperation with excellent German partners from science and private companies. This will create a founda-tion for achieving a new level of quality in research cooperation after the German-Russian Year of Science has ended.