In Europe, science academies can look back on a long tradition and release independent statements as part of science-based political consulting on global and social questions. This is not yet the case in Africa. As a result, the aim of this project was to strengthen African science academies in their role as independent consulting institutions for the public or for politics. 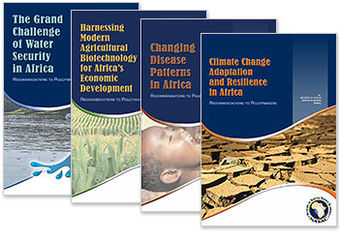 The joint development of statements for science-based political consulting by German and African researchers was at the heart of the project – a cooperation between the Network of African Science Academies (NASAC) and the German National Academy of Sciences Leopoldina – completed in November 2015. African academies can use these “policy-maker’s booklets” to start up a dialogue with national, sub-regional and regional decision-makers. The project has also helped to create a network of excellent, independent African scientists from the fields of hydrology, climate research, health and nutrition as well as biosciences.

The four topics of water, climate research, health and biotechnology were widely discussed at a major scientific conference. In a second step, a smaller group of African and German scientists looked at the topic in more detail in workshops in order to develop the key contents for the statements.

In August 2014, the first themed statements was published as a brochure on “The Grand Challenge of Water Security in Africa”. The African Academies developed recommendations for (political) decision makers on how to ensure a sufficient water supply for private use, agriculture and industry in Africa.

In June 2015, the second statement was published on “Harnessing Modern Agricultural Biotechnology for Africa’s Economic Development”. The key message to African political decision makers is to make use of the potential of modern biotechnology in the agricultural area for Africa. Approval of genetically modified plants, which has so far been handled very restrictively, should become easier in the future by defining and introducing consistent sets of rules for biological safety in Africa.

Finally, the last statement dealing with environmental issues was published in September 2015 on “Climate Chance Adaptation and Resilience in Africa”.

Added value of the German-African cooperation

In a follow-up project in the next two years, four communication events will market these recommendations – due to take place in Accra/Ghana in Western Africa, in Nairobi/Kenya in Eastern Africa, in Pretoria/South Africa in Southern Africa, and in Addis Abeba/Ethiopia for pan-African committees of decision makers – and at the same time increase awareness of the Africa strategy of the Federal Ministry of Education and Research. The aim is to establish a dialogue about science-based, sustainable policies regarding water management, climate change adaptation, biotechnology and health in Africa.

The successful cooperation between Leopoldina and NASAC also forms the basis for a further exploration of nutritional safety in the academy’s global network (InterAcademyPanel).

Further information about the project