Launch of the "German-Turkish Year of Research, Education and Innovation 2014" / Wanka: "Our goal is to intensify cooperation" 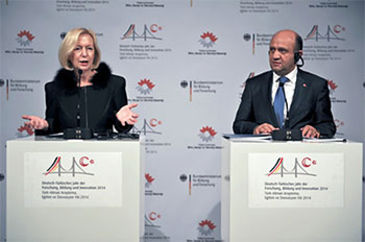 Federal Minister of Education and Research, Johanna Wanka, and her Turkish counterpart, Fikri Işık, kick off the "German-Turkish Year of Science, Education and Innovation 2014" in Berlin © BMBF, Jessica Wahl / Wahluniversum

Germany and Turkey are further expanding their collaboration: Today, the Federal Minister of Education and Research (BMBF), Johanna Wanka, and her new Turkish counterpart, Fikri Işık, Minister of Science, Industry and Technology of the Republic of Turkey, will kick off the "German-Turkish Year of Science, Education and Innovation 2014" (DTWJ) in Berlin. At this inaugural ceremony held in the Berlin E-Werk, past and future joint German-Turkish projects will be presented in an exhibition and new strategies for dealing with global challenges discussed. Both ministers will sign agreements on the future focus of the bilateral cooperation in education, science and research.

"Science knows no borders. It is more internationally organised and integrated than ever before and it thrives on the mutual exchange of information and cross-border networks. Germany and Turkey are bound by a long tradition of productive collaboration in research and education – a good reason to have a joint year of science. We aim to further intensify this cooperation and create new partnerships during this year," said Federal Minister Wanka. The inaugural ceremony will be attended by around 500 prominent representatives of German and Turkish science organisations, research institutes, universities and companies.

The motto for the Year of Science is "Science Bridging Nations". The German-Turkish Year of Science primarily focuses on issues for the future that affect everyone: They range from application-oriented research in key technologies to challenges in global transformation all the way to humanities and social sciences. Special priority is given to collaboration between research and industry, training in business, science and research and the interface between science and society.

Numerous conferences and specialist events are planned in Germany and Turkey throughout the Year of Science. A special highlight will be the "Turkish Weeks" at German universities in cooperation with the German Rectors' Conference; students, young scientists and the general public will have access to information related to study, research and university-specific cooperation projects with Turkey.

To initiate new projects that go beyond the Year of Science, the Federal Ministry of Education and Research and the Ministry of Science, Industry and Technology of the Republic of Turkey are each holding an ideas competition in two rounds. Funding will be awarded to high-profile projects that are particularly suited to drawing attention to and expanding German-Turkish partnerships in research, education and innovation. The goal is to attract, in particular, young scientists from both countries for the cooperation. The first selection round has already been completed. A total of 13 projects will be funded on the German side: 6 projects from the humanities and social sciences, 4 from the area of key technologies and 3 from the area of global transformation. The second round of the German announcement will run until 30/04/2014.

Germany and Turkey are linked to one another in a variety of different ways. More than 5,000 German companies operate in Turkey. This cooperation is a win-win situation for both countries due to the country's function as a bridge between Europe and Asia and the large numbers of people of Turkish descent in Germany. Almost 3 million people of Turkish descent live in Germany. Slightly more than half have German citizenship. "We appreciate the talents of people who are at home in two cultures and speak several languages. It is precisely this potential of our young, well-educated people, the young scientists from both countries and the renowned experts that offers important opportunities for both Germany and Turkey," said Wanka.

According to the higher education compass of the German Rectors' Conference, there are 848 partnerships between German and Turkish universities with a rising trend. One milestone in the many years of university cooperation between Germany and Turkey was the foundation of the German-Turkish University in Istanbul, which started classes in the 2013/14 winter semester.

You can find more information at: