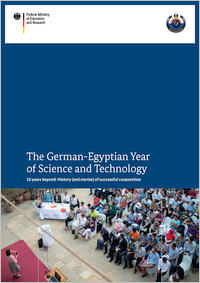 Information on the cooperation with Egypt

The 'German-Egyptian Year of Science and Technology 2007' (GESY) was an important milestone in German-Egyptian scientific relations. While it was the first ever bilateral science year for the German Federal Minitry of Education and Resaerch (BMBF), it was also one of the most successful in Egypt, especially since it initiated numerous joint projects and programmes that still exist and continue to have an impact today.

This event aims to strengthen the network of the German-Egyptian scientific and research community and create new impetus for cooperation in research and innovation. In addition, it also increases the visibility of the existing multi-faceted cooperation between Germany and the Arab Republic – ten years after the bilateral Year of Science 2007.

Both sides intend to sign a further research cooperation agreement on a new funding format: 2 + 2 'Innovation Programmes of Science-Industry Projects'.

The event is organised in close co-operation with the Egyptian Ministry of Higher Education and Scientific Research (MoHESR),  the Science and Technology Development Fund (STDF), approximately 70 supported GERF projects,  and German research and intermediary organisations.