The first "Turkey Autumn" brings a multitude of events in the areas of economics, science and culture to Cologne. This program aims to make a contribution to an exchange and to deepening German-Turkish relationships.

The twinning association Cologne-Istanbul is taking part with, among other things, a versatile program ranging from a cabaret evening to a presentation about the political situation in Turkey after the last presidential elections. The Rautenstrauch-Joest-Museum features a lyrical and musical journey of the artist Monika von Starck as well as the musicians Tuna Ufuk Sagay and Hüseyin Mehmetoglu under the title "One Week in Istanbul". 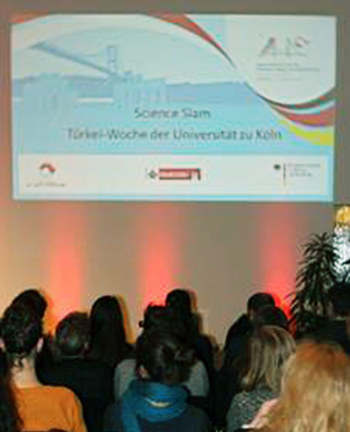 As a highlight of the "Turkey Autumn", the University of Cologne is organising the "Turkey Week", which Lord Mayor Jürgen Roters opened at 6 pm on Friday, November 7, 2014, together with the Chancellor of the University, Dr. Michael Stückradt and the head of the "International Affairs" department in the German Federal Ministry of Education and Research, Mr. Metzger in the historic City Hall. The "Turkey Week" started with a Science Slam, which the Federal Minister for Research and Education initiated in the context of the German-Turkish Year of Science. Six young German and Turkish scientists presented short, entertaining lectures on research themes. The audience then evaluated the presentations.

Until November 14, 2014, "Turkey Week" will introduce the great potential of the university cooperation between both countries to a large audience, in line with the "German-Turkish Year of Research, Education and Innovation 2014". The University of Cologne is cooperating with Turkish universities in many ways. For the realisation of "Turkey Week", she is receiving funding from the German Federal Ministry of Education and Research. The program includes information about studying in Turkey, musical presentations by well-known artists, presentations on the history of Turkey and a series of documentaries about six successful Turkish authors.

Further information can be obtained here.