Focus on support for young scientists and researchers and vocational training and education / Schavan: "We have made considerable progress." 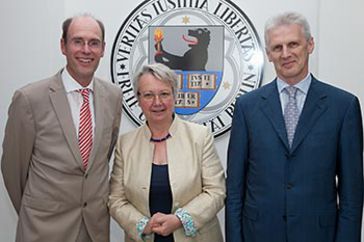 President of the FU Berlin, Dr Alt, Federal Minister of Education and Research, Dr Schavan and the Advisor to the Russian President, Dr Fursenko, at the closing event – © BMBF/ Mike Auerbach

The German-Russian Year of Science ends today with a conference at the Free University in Berlin. The motto of the campaign was "Partnership of Ideas". Since May 2011, it has been conveying the diversity and excellence of German-Russian partnerships in education and research in both countries. In well over 200 events, new contacts were made, key impetus was given for future projects and the way was paved for new initiatives. "Our ties at the research and education level have intensified markedly as a result. We have launched numerous developments that extend far beyond this Year of Science," explained Federal Minister of Education and Research, Annette Schavan. She gave it high marks particularly with respect to the strategy of focusing the Year of Science around four main issues: young scientists, vocational training and education, top-level research and innovation.

Cooperation among young researchers was fostered through joint lectures, workshops and working sessions. The collaboration between young scientists will serve as an important foundation for bilateral partnerships. "The ongoing dialogue between young German and Russian scientists will deepen our cooperation. I am pleased that we have made considerable progress in pursuing this shared interest," emphasised Schavan. The main participants were the German National Academy of Sciences (Leopoldina) along with the Junge Akademie and the Council of Young Scientists of the Russian Academy of Sciences. At the Russian-German Young Researchers Cooperation Forum that took place in Moscow in December 2011, the first discussions were held on possibilities for intensifying scientific cooperation between young scientists and the groundwork was laid for bilateral research projects with a memorandum.

Politicians, business people and scientists from both countries met for the first time at a large conference on vocational training in the Russian city of Kaluga. All participants underscored the significance of German-Russian pilot projects in vocational education and training and decided to incorporate the results of the deliberations into the bilateral government consultations. The BMBF and its Russian partner ministry, MON, will set up a joint working group to support the partnerships in vocational training and education. This includes the Russian educational reform process that aims, among other things, to become more practically oriented in vocational training; coordinating vocational education standards particularly in the Russian automotive industry; and supporting German companies that offer training in Russia as providers of education and training, for example, in the energy efficiency sector.

To strengthen joint top-level research, one of the aims of the Year of Science was to mutually open up and create shared research structures and expand joint project funding of both ministries. International graduate colleges, for example, are planned. German-Russian top-level research, which is already excellent in the area of information technology as evidenced by the large-scale projects XFEL (European x-ray laser in Hamburg) and FAIR (international accelerator facility in Darmstadt), will be further intensified through agreements in the area of supercomputers. A cooperation agreement was signed today by representatives of the two Helmholtz Centres, DESY and XFEL, the Forschungszentrum Jülich and the Moscow-based Kurchatov Institute as well as T-Platforms, a leading Russian provider of systems, services and solutions in the area of supercomputers. The agreement primarily revolves around access, management, storage and analysis of large quantities of data.

German-Russian partnerships were conceptualised and pilot projects launched during the Year of Science. Two German-Russian innovation conferences were held. The tried-and-tested bilateral funding of Russian and German small and medium-sized companies (SMEs) continued with the fourth joint announcement of the BMBF and the Russian Foundation for Assistance to Small Innovative Enterprises (FASIE). In March of this year, the Scientific Advisory Council of the Skolkovo Foundation made up of high-profile Russian and international members convened in Berlin and visited the Berlin-Adlershof science and technology park, the Berlin-Buch healthcare facility and the Technical University of Berlin. The Council signed a declaration of intent with the TU to collaborate closely with the Skolkovo Research City, which will be constructed on the outskirts of Moscow by 2015. Basic and applied research will be merged at this facility and Russian and foreign scientists and researchers will work and teach together here.