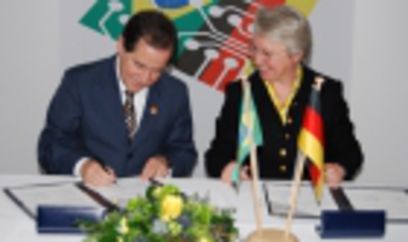 "How can we combat global climate change? How can we strengthen innovation and growth? These important questions can only be answered with the help of international partners such as Brazil," said Federal Research Minister Annette Schavan in São Paulo on Monday. Together with her Brazilian counterpart Sérgio M. Rezende, she opened the German-Brazilian Year of Science, Technology and Innovation 2010/11, which has the slogan "sustainable:innovative". "Together with Brazil, we want to break new ground in our cooperation, particularly in promising fields of the natural sciences and technology," said Schavan. The aim is to strengthen relations by launching new projects and intensifying student and researcher exchanges. "Collaborations will strengthen the international competitiveness of both countries and will also enhance the potential of both research locations," said Schavan.

Numerous science, education and research organizations in Germany and Brazil are organizing bilateral conferences, workshops and exhibitions over the course of the year. For example, the research collaboration BRAGECRIM, which is funded by the German Research Association, will present itself at the German-Brazilian Economic Meeting in Munich in May 2010; a number of Fraunhofer institutes are organizing bilateral conferences; the German Academic Exchange Service is participating in trade fairs in Brazil and Germany and will provide information about bilateral cooperation in education; the German Rectors' Conference is working on a new university framework agreement; and the "Science Tunnel" exhibition of the Max Planck Society will open in Brazil in spring 2011. Events organized by key universities and research institutions will present the excellence of both science locations and provide new impetus for intensified cooperation. "The large number of different events will appeal to a broad public. After all, research needs to be backed by society in order to be accepted by the general public," Schavan said. "I would like to thank the universities and research organizations, the German Academic Exchange Service and the many participating associations for investing so much work and enthusiasm in this initiative."

Brazil is already one of Germany’s most important partners in Latin America, not just economically, but also in the area of education and research. There are more than 230 university collaborations between the two countries, and more than 2,000 Brazilians are studying in Germany. More than 1,200 German companies are active in Brazil. "I am very pleased that we have a strong network to build on and that Germany and Brazil already enjoy intensive contacts," Schavan said. World-class innovations can only be generated if there is an educational system that produces creative and highly qualified young researchers. "Brazil has enormous raw material reserves and great potential in the area of renewable energy. Germany has innovative cutting-edge technologies and is a driver of innovation, particularly in the field of green technologies. Let us pool our strengths! In this way, we can develop projects that will benefit both partners in equal measure," Schavan said.

The opening event in São Paulo was accompanied by a discussion entitled "Innovation Systems and Sustainability in Germany and Brazil – Prospects for Bilateral Cooperation". It featured high-ranking representatives from the areas of science, politics and industry. There was also an accompanying exhibition in which German organizations – including the Alexander von Humboldt Foundation (AvH), the German Academic Exchange Service (DAAD), the German Research Association (DFG), the Leibniz Association (WGL), the Fraunhofer Society (FhG), the German Centre for Research and Innovation in São Paulo (DWIH), the German Association of Engineers (VDI) and the Chamber of Commerce Abroad (AHK) – presented the excellence of German science and innovation.

Further information on the German-Brazilian Year and its events is available in German and in Portuguese on http://www.deutsch-brasilianisches-jahr.de/