'Eye of the Sky' photo exhibition for the ASEAN-EU Year of Science 2012 opens / research projects develop solutions for the environmental problems in Southeast Asia. 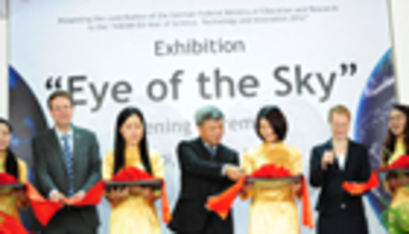 "Eye in the Sky", a travelling scientific photo exhibition, premiered on 4 May in the Vietnamese capital of Hanoi and will be followed by stops in Singapore, Indonesia, Malaysia and Thailand. The BMBF-funded exhibition, which is being organised locally by the DAAD is a highly visible German contribution to the ASEAN-EU Year of Science 2012. Designed by the BMBF's International Bureau and produced by the German Aerospace Center (DLR), the large-scale photos show impressive satellite images of both continents taken by the DLR. They show how human beings are transforming natural spaces and they illustrate the challenges science faces in terms of sustainable management of natural resources for a growing population.

During the ASEAN-EU Year of Science 2012, the scientific-technological cooperation between the European Union (EU) and the ASEAN member countries is being showcased to the general public. The Asia-Pacific region is becoming one of the most influential regions in the world, not only in economic terms but also with respect to science. Germany and Europe have recognised its growing importance and are collaborating more and more with the leading nations in research and education in Southeast Asia. Along with the growth markets of China and India, the heavily populated countries of Indonesia, Vietnam, Malaysia and Thailand are playing an increasingly important role. One goal is to broaden the basis for cooperation through joint activities during the Year of Science. Another is to stimulate interest in science and research and show that society can benefit from them.

The images feature, among other things, bilateral projects funded by the BMBF that develop partnership-based solutions to the environmental problems in Southeast Asia.

Karst landscapes, for example, cover one quarter of the land surface in the region. Rain and groundwater are stored in underground rivers of the karst mountains and is therefore difficult to access for the population's water supply. The University of Karlsruhe (now the Karlsruhe Institute of Technology KIT) worked together with German and Indonesian partners to develop new technologies that make it possible to sustainably extract water even in these difficult conditions.

In the neighbouring country of Vietnam, the Mekong Delta is one of the most important rice-growing regions in the world but is increasingly threatened by salinisation – a consequence of the rising sea level brought about by climate change. Exacerbating this situation are the effects of overfishing and the discharge of untreated industrial wastewater. The WISDOM project, coordinated on the German side by the DLR, is developing a water information system that contains data on the state of the Mekong Delta. It is a valuable tool for those responsible in Vietnam to sustainably manage the natural resources of the Mekong Delta.

Solutions relevant for the entire Southeast Asian region are being developed in another project. The growing need for energy is primarily met by domestic coal resources. The Ruhr University of Bochum is working together with other German partners to help the Vietnamese authorities contain environmental damage in open-pit mines and replant abandoned areas affordably.

The exhibition will also be on display in parallel in Europe over the course of the year at, among others, the EU Conference "Challenges and Opportunities of International Cooperation in Horizon 2020" on 19 June in Bonn and at the "Euroscience Open Forum 2012" from 11-15 July in Dublin.

You can find more information about this exhibition and the research projects associated with it in an English brochure at: http://www.bmbf.de/pub/eye_of_the_sky.pdf.

Photo: Ms Lada'a, Culture and Press Officer of the German Embassy in Hanoi, Mr Thanh, Vice-Minister of the Ministry of Science and Technology and Dr Kammesheidt, IB of the BMBF (from right to left), at the opening ceremony of the "Eye of the Sky" photo exhibition in Hanoi. – © Hoang Duc Thinh