Young scientists present the results of their Arctic research in Bonn. 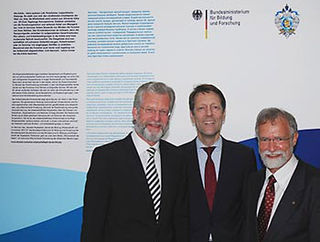 Research into the oceans and polar regions has traditionally seen German and Russian scientists work closely together with great success. A joint exhibition for “The German-Russian Year of Education, Research and Science” currently on display at the Museum König in Bonn graphically depicts the importance of this joint cooperation for science. As well as experiencing displays using text and images, Visitors to the exhibition organised by the GEOMAR Helmholtz Centre for Ocean Research Kiel also have the opportunity to meet students and young scientists who are keen to share their experiences from the Arctic Circle in Siberia.

“Research museums like the Museum König are not only home to outstanding research; they are also centres of education and knowledge transfer,” explained Secretary of State for Education and Research Georg Schütte at the exhibition’s opening. “I have been thoroughly impressed by the commitment and energy that these young scientists have dedicated to producing new research results in sometimes very extreme conditions in the Arctic, and presenting their findings here to an eager audience as living exhibition guides,” Schütte continued.

The special exhibition focuses on research into ice formation in the Arctic marginal seas but also the decline of sea ice in the Arctic as the result of present-day climate change, and into gas hydrates in the Black Sea. The exhibition demonstrates how scientists are reconstructing the climatic history of the Earth based on deposits in a crater lake, and how thick layers of ash in the Kamchatka peninsula can provide insight into the development of volcanic activity in the north-west Pacific. Working jointly from the Samoylov station in the Lena Delta, German and Russian experts are investigating the thawing of permafrost soils in Siberia, and its effects on the methane embedded within the soil.

German-Russian research activities are being coordinated by the Otto Schmidt Laboratory, established in St. Petersburg in 1999, and run in Germany by the Alfred Wegener Institute for Polar and Marine Research in the Helmholtz Association and the GEOMAR Helmholtz Centre for Ocean Research Kiel. Moreover, the Universities of Hamburg, Bremen and Cologne, together with St. Petersburg State University, are running a joint German-Russian master’s degree programme for Polar and Marine Sciences (POMOR), which is also being showcased by the exhibition organised by GEOMAR.

The exhibition has previously been on display in St. Petersburg and Moscow as part of the “German-Russian Year of Education, Science and Innovation 2011/2012” and is now beginning its German tour in Bonn where it will be on display until 17 May. From 22 May it can be viewed at the Free University Berlin.

Further information can be obtained at www.deutsch-russische-partnerschaft.de/de/146.php