The launch event of the Russia country campaign took place at the State Polytechnical Museum Moscow on 29 March. More than 200 representatives of the German and Russian research communities participated in the event. Optical technologies, nanotechnology, resource efficiency and health are the priorities of the campaign and will now be addressed in a targeted way by joint German and Russian networks. 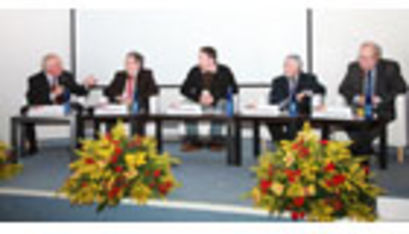 The Russia country campaign which is part of the "Promoting Innovation in Germany" initiative under the umbrella of "Research in Germany" is a continuation of the German-Russian Year of Education, Science and Innovation 2011/2012 which ends in May 2012. The slogan of the German-Russian Year of Science - "Partnership of Ideas" - is therefore being sustained by the BMBF country campaign. The Russian partners considered the launch event and the campaign an additional impetus for extending bilateral research cooperation.

Over the coming two years, this campaign will support marketing projects of German research institutes and innovative businesses. Four networks will be supported by the BMBF:

Besides these four projects, which will tour as ambassadors to this campaign until the beginning of 2014, the launch event showcased two best practice examples stemming from previous specialized initiatives: Representatives of the EMPRU network of Fraunhofer IWU and the collaborative initiative of mechanical engineering in Saxony talked about success in the area of efficiency technologies, and representatives of RWTH Aachen reported on the marketing of education and technology services in Russia.

During the second part of the launch event, Iwan Rodionow, professor at the "Higher School of Economics" national research university, talked about bilateral research cooperation that strengthens innovation in both countries. The following discussion took up the topic of the previous keynote address and involved high-level speakers, such as Prof. Alexei Chochlow (Vice Rector of Lomonossov University Moscow), Prof. Michail Alfimov (Chairman of the Scientific and Technical Council of ROSNANO), Prof. Wolfgang Sandner (Director of the Max Born Institute), and Mr. Andreas Koleczko (ICT Fraunhofer). It was found that both countries conduct strategic research in similar fields. Optical technologies and energy efficiency are considered to have especially high economic potential. Strong audience participation and questions from the floor to the panel demonstrated the great interest in these fields.

The plenary section was followed by an innovation fair of the winning networks held in the foyer. Representatives of German networks conducted discussions with Russian experts from business and science and technology platforms. All in all, the launch event and the innovation fair were well received and met with strong public interest.