The University of Heilbronn organised three “Russia Days” between 24 and 26 April 2012 as part of the “German-Russian Year of Education, Science and Innovation 2011/2012”, an initiative of the Federal Republic of Germany and the Russian Federation. 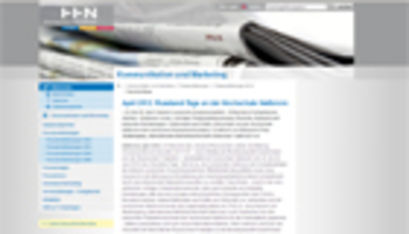 The objective of the event was to highlight the University of Heilbronn’s position as a centre of competence in German-Russian cooperation, and to provide new stimuli to help strengthen and expand the areas of application of its competencies by creating intensified network cooperation. The event, held mainly in the University’s auditorium, featured a number of lectures, panel discussions, concerts and cultural performances, all with a focus on different aspects of the subject of Russia. Alongside speakers from the world of politics and business, associations and the University of Heilbronn, the organisation team succeeded in inviting Prof. Anna Hayduk of the “International Business Management – Eastern Europe” study programme and guest speakers from Russian partner institutions, with the latter showcasing their institutions on information stands.

Audiences included the general public and specialist target groups, as well as business representatives, students of the University of Heilbronn and school pupils looking to study at higher education institutions in the future. All events were open to the public, free of charge and supplemented with culinary specialities from Russia and Swabia.

The “Russia Days” event was officially opened with a welcome address from Minister for Integration in Baden-Württemberg Bilkay Öney and a keynote speech from graduate of Business Administration (Dipl.-Kauffrau) Natalie Siegle, the first chairman of the “Förderung durch Bildung SPUTNIK” e.V. (Enterprise through education) immigrants association and member of the Heilbronn Integration Committee. Ms Siegle spoke on the integration of Russian immigrants in Germany. Audiences were also able to attend a number of additional speeches: “Erfolgreiche Organisationspraktiken ausländischer Unternehmen in Russland. Blick aus interkultureller Perspektive” (Successful organisational practices of foreign companies operating in Russia. The view from an intercultural perspective) by Prof. Anna Hayduk (University of Heilbronn) and “Der Vaterländische Krieg (1812) – Ein wichtiges Ereignis der deutsch-russischen Geschichte?” (The war of the fatherland (1812) – a key event in German-Russian history?) by Prof. Dietmar Högel (University of Heilbronn). As part of the “Mensch-Umwelt-Zukunft” (People, the environment, the future) series of lectures, Prof. Andrei Apukhtin of Sochi State University (Russia) delivered a speech on the theme of “The Sochi 2014 Legacy: Chance and Opportunity”.

The first day of the event was held under the theme of “The Russia challenge. A foray into culture, history, politics and economics”.

The programme for the second day focused on the “German-Russian Business Forum”:

reported on their experiences of German-Russian cooperation. The panel discussion on “Doing business in Germany and Russia – is there a single formula for success?”, which was chaired by Vice-Chancellor of Research and Continuing Education Prof. Kathrin Köster, saw speakers, tutors and students of the University of Heilbronn and business representatives discuss the potential, challenges and solutions associated with German-Russian cooperation.

The final day – “Russia-conscious studies at the University of Heilbronn” was specifically aimed at those with an interest in studying, school pupils, tutors and students.

Two focus forums were held; the first looked at the “International Business Organisation – Eastern Europe” (IBO) study programme, while the second provided the opportunity for German and Russian professors and University of Heilbronn students to report on their experiences with partnership ties between the University of Heilbronn and Russian higher education institutions.

The Russia Days at the University of Heilbronn concluded successfully and were characterised by the active participation of visitors and an overwhelmingly positive response from all target groups.