New trade fair concept, new perspectives: At the première of the Moscow “Open Innovations” trade fair, held between 31 October and 3 November 2012, the winning networks of the BMBF-funded National campaign for Russia actively extended their networks – much further than the city boundaries of Moscow. 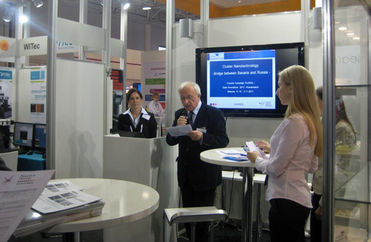 The four R&D networks – NanoBRIDGE (Bridging of German and Russian Nanotechnology Excellence), ENNA (Energy Efficiency and Sustainability of Buildings), SOJUS Bioenergy (SOYUZ Marketing Russia) and Light4LIFE (Marketing for Germany, Center of Innovation in Optical Technologies) represented future technologies such as optical technologies, nanotechnology and environmental technology. These fields were precisely aligned with those united under one roof at the redesigned innovation trade fair – which incorporated the “Moscow International Forum for Innovative Development – Open Innovations” and the “Open Innovations Expo”.

“Open Innovations” brought together different current fields of technology, thereby enabling all networks to enter the national campaign. For instance, the Light4LIFE network was able to showcase its expertise and research results in the field of clinical biophotonics, including optical coherence tomography, not just on the BMBF stand but also during presentations given during the forum. The ENNA network was also represented at two sessions by a keynote speaker/participant in a panel discussion: at the “City in the Light of Sustainable Development” event organised by the Moscow municipal government and at “Green Technologies in Construction Industry – Creation of a Comfortable and Sustainable Future”, organised by RVC Smart Future, an initiative for innovative companies involved in sustainable development. Alongside appearing at “Open Innovations”, the ENNA representatives also attended two symposiums at Moscow universities and a meeting with the “Green Building Council Russia”, presenting ENNA’s expertise in the energy efficiency of buildings to a total of 240 participants and developing a wide range of contacts among scientists and companies.

The NanoBRIDGE network, whose members marcotech and Cluster Nanotechnologie have been represented at “RUSNANOTECH” since 2008 as part of the German contingent, gave a positive assessment of the coming together of different topical fields of technology and the presence of so many different Russian technology centres. Their many years of attendance at the trade fair paid off: visitors specifically sought out the NanoBRIDGE network at the easy-to-spot BMBF stand. Despite the fact that the trade fair was only open to visitors for the forum on the first day – mainly managers from industry and politics – the NanoBRIDGE network still managed to establish around 50 contacts with Russian and German R&D organisations. Shortly after the trade fair, NanoBRIDGE had already received many applications for membership. The upcoming “German-Russian Forum Nanotechnology”, set to take place from 22 to 23 May 2013 in Tomsk as part of the BMBF National campaign for Russia, also drew a lot of interest. Gabriele Gorzka, the project coordinator, summarised by saying: “All in all we have established that for the NanoBRIDGE network it was worth our while participating in BMBF’s joint stand at “Open Innovations”.”

The SOJUS Bioenergy network also drew positive conclusions from its participation in the trade fair. In Russia the subject of bioenergy is increasingly being viewed as an issue of importance for the future. Considerable quantities of raw biological materials from the forest, agriculture and waste fractions, which are available in addition to fossil resources, offer additional sources of revenue. They could be used to sustainably secure the energy supply, for which there is room for improvement particularly in rural areas. As such, many visitors to the stand were looking for a contact and introduced topics from the field of bioenergy. Regional supply, one of the network’s core areas, played an increasingly vital role in this. Russian interests were also underpinned by a Skolkovo meeting on the topic of bioenergy. The SOJUS network was also able to introduce and promote its network and create numerous contacts with a multiplying effect when it visited the trade fair stands of Russian regions.