The EU sponsored Science and Technology cooperation with Russia, the countries of the EU’s Eastern neighbourhood, South Caucasus and Central Asia is looking back on a splendid track record. In order to develop perspectives for a future cooperation that is coordinated in a more multilateral way, the German Federal Ministry of Education and Research (BMBF) has invited to an international conference, that took place in Bonn on 10 and 11 of October 2012. 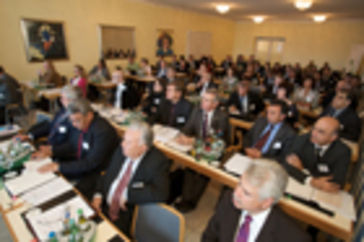 On initiative of BMBF, participants form Russia, Belarus, Ukraine, Moldova, Armenia, Azerbaijan, Uzbekistan and Kazakhstan discussed with representatives of various EU countries, Turkey, Switzerland and Norway and of the EU Commission. The 70 participants at first reflected the experiences of cooperation made so far. Above all, they discussed tangible proposals for a more multilateral coordination of common S&T funding.

In the beginning, Michael Schlicht, Director for Cooperation with Russia and CIS-Countries of BMBF, outlined the concern of the event and the thematic scope of the discussions. He stressed the need to critically reflect the bi- and multilateral cooperation between Europe and its neighbouring regions to the East. Promising scenarios of cooperation would have to be developed. Subsequently, within three key-note speeches representatives of the EU Commission, of the Ukrainian Science and Innovation Agency and participants of the FP7 project ERA.Net RUS asked programmatic questions for the following course of the conference.

The discussions have been followed by authoritative political actors, representing amongst others the Ministry of Education and Science of the Russian Federation or the State Committee of Science of the Republic of Armenia. An active part was played also by representatives of research performing institutions and funding agencies (e.g. various Academies of Sciences), and also by researchers active in multilateral cooperation as e.g. the Scientific Managing Director of the international research facility FAIR, Boris Sharkov.

The conference proved the high significance of S&T cooperation between the EU and the countries of Eastern Europe and Central Asia, which is manifested not least of all in the high participation of the CIS-countries in the 7th Framework Programme. The discussions also underlined the need for common measures and instruments for funding. At the same time, it was stressed that the impact and sustainability of common cooperation should also be measured.

The conference was organised by BMBF in cooperation with the FP7-projects ERA.Net RUS, Black Sea ERA.Net, Inco Net CA/SC, BILAT-RUS and BILAT UKR*AINA.